A Life in a Year – 14th January, Henry Ford invents the Hamburger

On 14th January 1872 Henry Ford introduced the concept of the assembly line and he revolutionised modern transportation but as a consequence of this he also helped introduce the fast food restaurant.  In 1955, an American businessman with a sharp eye for an opportunity called Ray Kroc unleashed a restaurant revolution and the beginning of the western world obesity problem when he opened the ninth McDonalds franchise restaurant, in Des Plaines, Illinois, which eventually led to the McDonalds Corporation and world domination by the hamburger giant.

Kroc was a milkshake machine salesman and his work brought him into contact with the two brothers, Maurice and Richard McDonald, at their innovative hamburger restaurant in San Bernardino in California when he became intrigued by the volume of sales at a relatively small restaurant and went to visit them to understand why.  The brothers were interesting characters who were inspired by the assembly line manufacturing method of Henry Ford and in 1948 they had temporarily closed their successful but traditional restaurant for several months for a refit and when it reopened some time later had applied the principles of mass production to the restaurant industry.

They pared the service back to the bare essentials, offering a simple menu of hamburgers, french fries and milkshakes, which rather than made to order were produced on a continuous basis and with no alternatives offered.  Food could therefore be served to a formula, nearly instantaneously and always consistently, a new idea that they called “fast food”.  There were no waitresses and customers walked to a single window to place and receive their orders.  They made the food preparation area visible to the customers, to exhibit its standards of cleanliness, and to save on the washing-up they eliminated all plates and cutlery, serving orders in simple paper bags.

The two brothers were not particularly ambitious however and they were quite satisfied with their single successful restaurant and the comfortable life that it provided for them but Ray Kroc saw the potential of the idea and wanted to have even more new McDonalds (more restaurants = more milk shake machine sales) and he pressed them to expand the operation.  Eventually he lost patience with them and forced the brothers out of business by opening a rival diner in competition that he called McDOnalds (similar but not quite the same) right on the other side of the street.  The small restaurant of the two brothers lost a lot of their customers and Ray Kroc bought them out in 1961 for $2.7 million, which was a tidy sum in 1961.

McDonalds didn’t reach the United Kingdom until 1974 and now there are over a thousand of them and the Company business plan is to open thirty new restaurants every year.  I don’t remember when I first started using McDonalds, probably at about the time my children started to request it as a dining option, and now, apart from the occasional breakfast bun, I would only use it if I am absolutely desperate!

McDonald’s restaurants are now operating in 119 countries and territories around the world and serve 58 million customers each day. It operates over 31,000 restaurants worldwide, employing more than 1.5 million people. 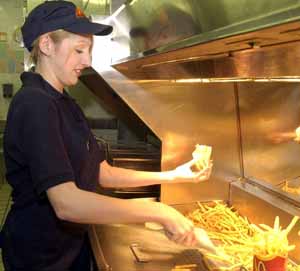 3 responses to “A Life in a Year – 14th January, Henry Ford invents the Hamburger”