A Life in a Year – Job References

These are extracts from job references provided for my dad, Ivan Petcher.

His first real job was as a Film Librarian working at Jessops in Leicester and then in June 1950 when he was eighteen years old he started his National Service in the Royal Air Force at the Air Ministry in London.  This sounds awfully exciting but I suspect that it probably wasn’t.  From 1949, every healthy man between the ages of 18 and 26 was expected to serve in the armed forces for a minimum period of eighteen months. Men were exempt from National Service if they worked in three ‘essential services’, which were coal mining, farming and the merchant navy, so not film librarians then!  I’d like to tell you that he was a fighter pilot or a commando or something thrilling but the plain fact is that he worked at the Air Ministry in London in the office as a clerk/typist whose job was ‘the compilation and maintenance of officers’ and airmens’ records and documents’. I can only imagine that this was exceedingly dull!

He must have enjoyed it however because he completed over two years and his discharge paper of 13th July 1952 says that his conduct was exceptional and his ability was very good, he was described as ‘smart’ on a scale of ‘very smart’, ‘smart’ or ‘untidy’ and he was summed up as ‘a very reliable and efficient clerk who has done good work and helped in the tuition of others’.  I can understand that because he was always the most helpful person with lots of patience when dealing with other people, sadly I didn’t inherit that characteristic.

The records now reveal that he was doing a bit of moonlighting because if he was discharged on 13th July 1952 it is interesting that he started work with Lewisham Borough Council in South London two weeks earlier on 1st July 1952 as a general clerk.  I think Mum’s Aunty Glad got him the job because she worked in the staff canteen and was good terms with some of the senior staff (nudge, nudge, wink, wink) and she put a good word in for him!  He stayed there for six months and when he left the Town Clerk, Alan Milner Smith, wrote of him “I found him to be an intelligent boy…and a thoroughly satisfactory officer”, I wonder how well he knew Aunty Glad.

He left Lewisham and a week before his twenty first birthday and took up a new appointment at Leicestershire County Council as a general clerk in the Common Services Section of the Education Department where he stayed until May 1957.  In that time he got married, I was born, and he bought his first two houses.  I think he must have been a sociable chap because he was enthusiastic in running the County Offices football and cricket teams and he kept meticulous records of games and performances from 1953 until 1956.  From my own experience I know that he was a well liked man and the Supplies Officer F E Collis wrote in a reference 0n 30th March 1957 “ he is very popular with the staff and an enthusiastic member of the office football team” he also said, in an old fashioned sort of way, “I have found Mr Petcher’s work perfectly satisfactory and he brings to it an enthusiasm which is all too often lacking in junior officers today”. I imagine F E Collis was about a hundred years old and remembered what administration was like in the days of Dickens and the Raj!

In May 1957 he left Leicestershire County Council and took a job at Hinckley Urban District Council as a Land Charges and General Clerk.  He bought his third house, Lindsay, my sister, was born in October and he cycled to work and back every day, a distance of about ten miles, later he got a moped but I seem to recall that it wasn’t especially reliable and sometimes he had to push it all the way home so he went back to the push bike.  This wasn’t sustainable of course so in 1959 they sold up and we sensibly moved to Hinckley to be close to his work.  That didn’t last long either and he left Hinckley on 31st  December 1960 and moved to Rugby Rural District Council and that’s how we came to move to Hillmorton.  I especially like his reference from F J Warren the Deputy Clerk of the Council who described my dad as “a useful, promising and reliable member of staff… I cannot speak too highly of his integrity and desire to give satisfaction” and he added in a quaint sort of way that you would never find today “he is of pleasing appearance and courteous to all with whom he comes in contact”. 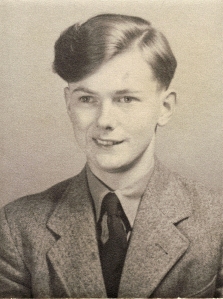 2 responses to “A Life in a Year – Job References”