A Life in a Year – 10th May, Vila Nova De Guia and the Port Wine Lodges 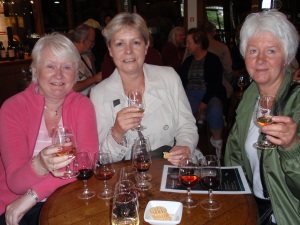 Once over the bridge and in Vila Nova De Guia  we started collecting the port lodge invitations that were being handed out like confetti and for no particular reason other than there was a free drink in it we decided to visit another.  Christine had picked up a flyer advertising Grahams and despite the fact that it was the furthest one away and the least sensible to visit that was the one we decided upon.  To get there we had to walk all along the south bank of the river and then negotiate a busy main road without a pavement that climbed and twisted away from the river and all the way we had to be wary of speeding traffic driving wildly around dangerous blind bends.  It was hot and we were glad to reach the lodge, find the entrance, pay the reasonable €3 admission and enjoy a nice chilled white port.

We thought we were going to enjoy a personal tour and this looked most likely until just as it started a coach full of Australian holiday makers gate crashed our tour and we were caught up in an antipodean Saga adventure through the cellars.  There was a film and then several stops for information and at least it was in English so Sue and Christine knew what it was all about.

We learned that under European Union guidelines, only the product from Portugal may be labeled as Port and it is produced from grapes grown and processed in the Douro region. The wine produced is fortified with the addition of a Brandy in order to stop the fermentation, leaving residual sugar in the wine, and to boost the alcohol content. The wine is then aged in barrels and stored in caves, or cellars, before being bottled. 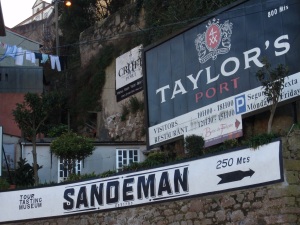 The wine received its name Port in the latter half of the seventeenth century from the city of Porto where the product was brought to market or for export to other countries in Europe from the Leixões docks. Actually there are no port lodges in Porto but an after dinner Vila Nova de Gaia doesn’t have the same ring to it.  The Douro valley where Port wine is produced was defined and established as a protected region or appellation in 1756, making it the third oldest defined and protected wine region in the world after Tokaji in Hungary and Chianti in Italy.

This was all very interesting stuff but what we really wanted was to get to the tasting and we weren’t disappointed when at the end of the tour we were given three generous glasses of port in the hope that we might buy some more from the shop.  Actually Kim and I enjoyed a bit more than that because our lightweight drinking companions only managed a sip from each glass so we were obliged to finish theirs for them as well as our own.

After Grahams we went to Croft and discovered here that the all-inclusive boat ride ticket that we had bought was a bit of a con because this was a free tour anyway.  We sat and tried a white aperitif port and then not wanting to wait half an hour for the English tour joined a party of Portuguese for the twenty minute walk through the barrels of ruby and tawny port and the cellars full of bottles special reservé and vintage wines.

Next we went to the Offley port lodge where there was a charge but this was covered by our boat trip ticket and once again, being impatient, we didn’t wait the half an hour for the English tour but this time joined a French one instead.  This was alright for me and Kim who had had an English tour the last time we came and visited the Cálem lodge and also for Micky who can follow a bit of French but it was not too helpful for Sue and Christine who had no idea what was going on.  At the end of the tour there was a tasting session with an especially nice reservé so we bought two bottles for evening consumption back at the hotel. 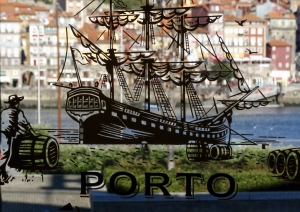