A Life in a Year – 21st May, Hillmorton County Junior and Infants School 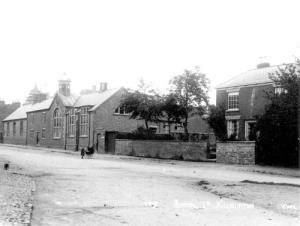 The Hillmorton County Junior School was an old Victorian building with high ceilings and partitioned classrooms with rows of old fashioned wooden desks and attached lift up seats. The classrooms smelt of furniture polish and chalk dust and the in the corridors there was an ever present odour of carbolic soap seeping out from under the washroom doors.  There were two entrances, one said boys and the other girls but these were from a previous time when the sexes were carefully kept apart.  This was no longer the case of course and with segregation a thing of the past we were free to choose the most convenient.

I rather liked going to school!  The day started as early as possible with a bit of a play on the way there and then there was fifteen minutes of activity in the playground behind the building, two playgrounds one for the infants and one for the juniors.  At the back of the playground were the outside toilets with no roof and completely exposed to the elements.  I think it is possible that the girls had inside facilities, I can’t remember, but for the boys it was the most primitive of arrangements.  After the whistle blew we lined up and took it in turns to march inside to hang our coats in the cloakroom.  In winter there were several rows of identical duffel coats with gloves on strings dangling through the empty sleeves and underneath in neat rows, Wellington boots with puddles of water seeping from the compacted ice in the soles that was melting and spreading over the red quarry tiled floor.

The Headmaster was Mr (George Edward) Hicks and he generally led an assembly with a hymn and a prayer and a short address.  He was a decent sort of chap but he never seemed to take to me and in days when favouritism was acceptable I found him to be quite unsupportive.  I just enjoyed being at school, especially the play times, and wasn’t terribly bothered about the learning bits in between so I think he wrote me off at an early stage as being a bit of a no-hoper and advised my parents to buy me a pair of clogs and prepare me for a long dull working life in a factory, as he was certain that I was destined to be one of life’s academic failures.

I met him years later when he came knocking on the door collecting for the RNLI and I think he was genuinely shocked when I told him that I had been to University and had a nice office job with good prospects at the Council.  For slow learners there was no such thing as special educational needs or additional support mechanisms of course and the class was set out in a strict hierarchy with the fast learning favourites at the front getting all of the attention and the dimwits at the back making table mats out of raffia.  I suppose I would have found myself about two thirds back from the blackboard.  I was a late developer!

I can remember two other teachers, first there was Mrs Bull who taught year three and had a ferocious look that made our knees knock with fear and then Miss Roberts who taught year four and was a bit of a pin-up who made our legs turn to blancmange when she looked our way.  Oh and Mr Etherington, who always had a cold sore and a drip on the end of his nose, I think he took the top class in juniors but I can’t be sure.

After morning lessons there was break time with more play and a bottle of milk for every pupil courtesy of the County Council.  The 1946 School Milk Act had required the issue of a third of a pint of milk to all school children under eighteen and this was a nice thought if not always a pleasant experience.  In the summer it stood outside in the sun and it was warm and thick because this was full cream milk, not the semi-skimmed coloured water that we have today, and in the winter it had a tendency to freeze and pop through the foil cap in an arctic lump that had to be sucked away before you reached the semi-liquid slime underneath.  No one knew about lactose intolerance in those days and it was compulsory for everyone and there were always teachers on hand to make sure that everyone finished their drink of milk.

More late morning lessons then lunch break with a quick dash home and return as quickly as possible for more recreation in the playground.  Afternoon lessons and then it was soon all over and we were released onto the streets to make our way home.  Outside the school at the end of the day there were no rows of cars clogging up the streets because everyone walked to school in those days.  And we weren’t kept inside, in a state of paranoia until we were collected either.  There was no need to worry, you see, children knew instinctively to keep away from the strange people in the village and there were not nearly so many cars on the road at that time to knock us over.

The friendly little Hillmorton County Junior and Infant School was demolished sometime in the 1970’s and a featureless replacement was built at the top of Watt’s Lane.  They built some houses on the site and my sister Lindsay lived in one for a while which surprised us all on account of her previous history of serious allergic reaction to anything to do with being anywhere near a school building.

This picture was taken on 21st May 1965 in the school play ground to celebrate an RNLI fund raising day at the school.

5 responses to “A Life in a Year – 21st May, Hillmorton County Junior and Infants School”