A Life in a Year – 23rd May, The Importance of good Bladder Control 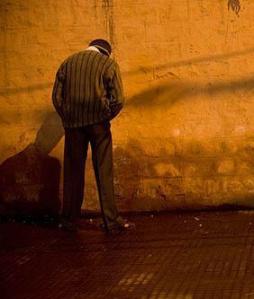 On 23rd May 2007 we were visiting Ljubljana in Slovenia and on this day took a bus trip to Lake Bled in the Julian Alps.  When it was time to go we went back to the bus station for the return journey to Ljubljana.  Although there was a worrying lack of activity at the bus stop there was some amusing entertainment.  There was a group of people who had clearly been drinking alcohol for most of the day and were a little the worst for it.  It was the end of their drinking session and it had reached that point when they were becoming irritated by each others company so they slurred goodbye to each other and set off home, each in different directions.

One man had only managed about a hundred metres or so when the pressure of alcohol in his bladder required an unscheduled stop for emergency relief.  Unfortunately for him there were no facilities around and to be truthful he was in such a state that this was completely irrelevant anyway.

Under normal circumstances taking a pee is a fairly straightforward process but to prevent little accidents it has to be carried out in the correct sequence of events and due to his inebriated condition he proceeded to demonstrate the absolute importance of getting things carried out in exactly the correct order.  He located a convenient spot, steadied himself with one hand against the wall and fumbled about with his trouser flies with the other but being unable to get his tackle out quickly enough and completely unable to coordinate his bodily functions he opened the piss release valve and proceeded to slowly slash down his leg in spectacular fashion so that his immaculately tailored jeans became slowly stained by a creeping patch of steaming urine that eventually stretched from his crotch to his socks.

He was most perplexed by this and stood for a moment or two trying desperately to understand the sequence of events that had resulted in his waterlogged state but quite unable to comprehend his predicament eventually staggered off down the road stopping frequently to examine his unusually two-tone discoloured trousers and no doubt wondering how he was going to explain it when he finally got home.