The seven hundred year period between 722 and 1492 has long been known to historians of Spain as the ‘Reconquista’ and modern Spain has organised the interpretation of its medieval history around the drama of this glorious event which over time has become a cherished feature of the self-image of the Spanish people.  It has become embellished into a sort of organised Catholic national crusade and although there is some truth in this much of it in reality was simply due to the territorial ambitions of competing northern Spanish kingdoms such as Asturias and León.

In legend the focal point of the story of the Reconquista has been the heroic tale of Rodrigo Díaz de Bivar or El Cid, the National hero of Spain and revered by many as being single handedly responsible for the victory of the Catholic Kingdoms over the North African Moors and whilst El Cid was undoubtedly a great warrior and soldier he was only one of many who contributed to the Crusade.  The explanation for his pre-eminence is the responsibility of Ramón Menéndez Pidal, who was the foremost Spanish historian of his age and the author of the standard biography of the Cid, first published in 1929.  Pidal gave substantial credibility to the ‘Poema de Mio Cid’, which was a work written at the height of the crusading age and, crucially, fifty years after the Cid’s death.  Then, his valiant deeds against the Muslims made him a suitable exemplar to inspire a generation of holy warriors fighting the Crusades, and his life quickly moved into the realms of legend.

In the eighth century almost all of the Iberian Peninsula was conquered by expansionist Muslim armies from North Africa. Only a number of areas in the mountainous north that roughly correspond to modern Asturias, Cantabria, Navarre and northern Aragon managed to resist the initial invasion and many years before El Cid this was to become the breeding ground of the Reconquista.

Life under Moorish occupation was a bit mixed, for some it wasn’t that bad and under Islam, the status of Christians and Jews was recognised, there was great religious and social tolerance and in return for a small tax they were free to practice their own religion but for others there was persecution and intolerance and many indigenous people fled north.  Throughout the occupation conversion to Islam proceeded at a steadily increasing pace however and by the end of the tenth century Muslims of ethnic Iberian origin are believed to have comprised the majority of the population of Andalusia.

In legend the story of El Cid and the reconquest has acquired a rather simple plot of Christian Spain against Muslim Moors but throughout this period the situation in Iberia was much more intricate.  As well as fighting against each other Christian and Muslim rulers commonly fought amongst themselves, the Berbers of North Africa, who had provided the bulk of the invading armies, clashed with the fundamentalist Arab leadership from the Middle East and to further complicate matters interfaith alliances were not unusual.  The fighting along the Christian Muslim frontier was punctuated by prolonged periods of peace and truces and distorting the situation even further were mercenaries who frequently switched sides and fought for cash. 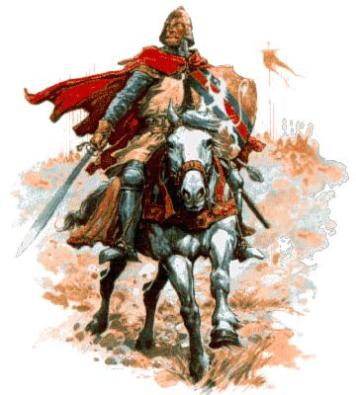 El Cid lived at this confusing time and he too at various times had Muslim allies and at other times worked for Muslim paymasters against Christians because he was, in short, a warrior for hire, a mercenary, who spent much of his career fighting for whoever paid him the most.

In popular culture the reconquest has been raised to the status of a crusade and the driving out of the Moors as liberation from an occupying army but again this is not strictly the case.  At this time Córdoba became the largest, richest and most sophisticated city in Western Europe. Mediterranean trade and cultural exchange flourished. Muslims imported a rich intellectual tradition from the Middle East and North Africa and Muslim and Jewish scholars played an important part in reviving and expanding classical Greek learning in Western Europe. The indigenous cultures interacted with Muslim and Jewish cultures in complex ways, thus giving the region a distinctive and diverse society.  Outside the cities, the land ownership system from Roman times remained largely intact as Muslim leaders rarely dispossessed landowners, and the introduction of new crops and techniques led to an improvement and expansion of agriculture.

However, by the eleventh century, Muslim lands had fractured into rival kingdoms and this encouraged the northern Christian kingdoms to expand southwards with the opportunity to greatly enlarge their territories and consolidate their positions.

As early as 739 Muslim forces were driven out of Galicia and a little later Frankish forces established Christian counties south of the Pyrenees and these areas were to develop into the Kingdoms of Navarre, Aragon and Catalonia.  The capture of Toledo in 1085 was soon followed by the completion of the Christian powers reconquest of all the northern territories.  El Cid’s greatest contribution to the Reconquista came during this phase of the war and his finest victory was the capture of Valencia in 1094.

Aged 56, El Cid was shot by a stray arrow in a battle on July 10th 1099 and he died shortly afterwards.  After his death his wife Ximena ruled in his place for three years until the Almoravids once again besieged the city.  Unable to hold it, she abandoned Valencia and organised the evacuation of the Christians.  King Alfonso ordered the city to be destroyed to prevent it from falling into the hands of the Almoravids and what was left of Valencia was captured by Masdali on May 5th 1102 and would not become a Christian city again for over one hundred and twenty five years.  Ximena fled north with the Cid’s body to Burgos where he was originally he was buried in the monastery of San Pedro de Cardeña but his body now lies at the centre of the Burgos Cathedral.

El Cid and Alvar Fáñez de Minaya, another hero of the Reconquest

El Cid and his Horse, Babieca

El Cid and his Wife, Ximena