A Life in a Year – 12th July, The Agony of a Driving Test 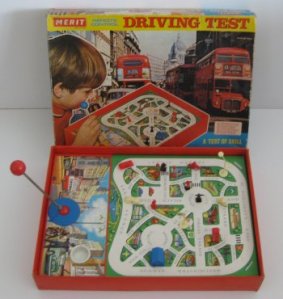 I had been learning to drive, on and off, since 1972 or thereabouts but at this time was not especially enthusiastic or in a hurry because I was studying at University with no money and no prospects of owning a car so it all seemed a bit pointless. Some of my friends had learnt to drive as soon as they were seventeen, Rod Bull had a bubble car and Steve Veasey some sort of old Austin Cambridge but at this time I had no burning ambition to be a motorist.

When I was at home, out of term time, I generally had a job at the local council so had some spare cash and encouraged by my parents took some lessons with a local driving school but I think the instructor, Lois, would get frustrated with me on account of my lack of drive (pardon the pun).  In Cardiff I took lessons from a Canadian instructor in a Hillman Imp and each lesson cost £2 for an hour.

I was ok at driving but one thing that I just could not get to grips with was reversing around a corner.  I was fine with three-point-turns, emergency stops and hill starts but when it came to driving backwards I was completely hopeless.  The instructor was quite baffled by this and would stick bits of paper in the window and on the steering wheel to try and help me line it up but nothing worked and my route around a corner backwards always looked like an electrical wiring diagram!  I preferred tight ninety degree corners but had a dread fear of those long arching crescent shaped ones because these were much easier to get wrong.

Eventually, despite this, the instructor decided that it was time to apply to take the test and my appointment came through for 12th July 1974.  I remember that it was a hot day and in the hour lesson before the test I did a few practice reverses with the inevitable consequences and I am certain that the instructor had zero confidence in a pass result when he watched me drive off with the driving examiner.

Everything went well but I was dreading the reversing bit because I knew that this was where I was certain to fail. I knew it was coming when the examiner told me to pull over and I waited for the instruction.  ‘Please reverse around the corner behind you’, he said in his lilting Welsh accent and I looked out of the back window and wondered just what on earth he meant.  There was no road to reverse into! I looked at him quizzically and he repeated the instruction slowly as though I was dense or something.  I had to ask where and he pointed to a little service road running between the backs of two sets of old houses and I couldn’t believe my luck because it was only wide enough for a single car and it had brick walls on either side.  I slipped the car into reverse and drove it backwards absolutely perfectly because, believe me, it was impossible, even for someone with zero reversing skills, to get this wrong.  It was narrow and the brick walls made it easy to line the car up between them and I completed the manoeuvre perfectly and I knew it was near the end of the test so the ordeal was nearly over.

The examiner gave me some instructions and I knew we were on the way back to the test centre so in an effort not to screw things up I drove slowly and stayed in third gear.  ‘Come on, come on’, he said, ‘fourth gear, fourth gear’, and I couldn’t see the point because I would be turning left in just a few metres but I did as I was told and having done that he told me to turn left so I had to go back down the gears to make the turn and I remember thinking ‘what a dickhead!’

The last part of the test was the questions on the Highway Code which was nothing as demanding as today’s theory test and I answered a few questions easily and identified a few signs and then he finished and started to scribble on the paper on his clipboard.  I was shaking when he turned and said, ‘now, why were you driving so slowly just then?’  The answer must have been obvious even to him so I said nothing and he carried on ‘when I’m going home tonight and looking forward to my dinner and I’m stuck in a line of traffic behind someone driving slowly I’m going to think Mr Petcher’s in front of me aren’t I?

The only thought I had now was that I had blown it with a bit of snail driving and if I had to take the test again I would never be so luck with the reversing but then he smiled and said the magic words ‘It’s ok, you have passed your driving test’ and I was genuinely stunned and so was the driving instructor.  He congratulated me and asked me if I wanted to drive home but I was in such a state of shock so I said no thank you, let him drive me home and I smiled all the way back.

I was now a motorist and the following year even had transport when my parents gave me a two-tone blue Hillman Imp for my twenty-first birthday. 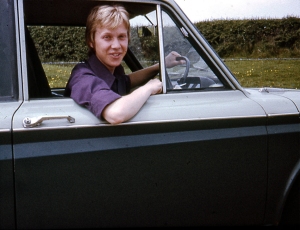 This entry was posted in Age of Innocence, Growing up and tagged Cardiff Driving Test Centre, Driving Test, Hillman Imp, reversing Around Corners. Bookmark the permalink.