A Year in a Life – 12th October, Columbus Day and The Great Salt Lake 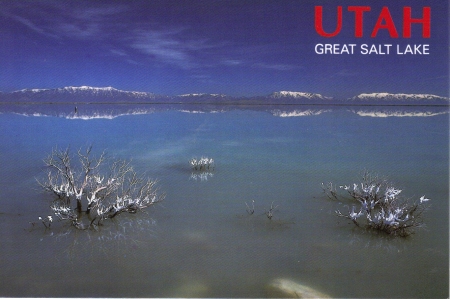 No one can be absolutely sure who first discovered North America but Christopher Columbus stakes a strong claim and 12th October is celebrated in the United States as Columbus Day. Whoever found it was lucky for us because in 1995 we visited the mid-west states and spent a couple of days in Salt Lake City.

On the second day there was a choice to be made, we could either enjoy a free day sightseeing and shopping in Salt Lake City or we could go on an optional visit to the Great Salt Lake itself and not being terribly keen on shopping and being so close to the Lake it seemed a shame not to take this opportunity.

The Great Salt Lake is the largest salt lake in the Western Hemisphere, the thirty third largest lake in the world and the fourth largest terminal lake in the world, which means that the water comes in but none goes out except through the process of evaporation.  In an average year the lake covers an area of around four thousand, four hundred square kilometres but the size fluctuates substantially due to its shallowness because it is only about ten metres deep and it can be as much as double or half that size in exceptional years.

It has been called America’s Dead Sea and certainly there are no fish in the Great Salt Lake because of the high salinity but despite this the area is in fact rich with wildlife and provides habitat for millions of native birds, brine shrimp, shorebirds, and waterfowl.  The salinity too is highly variable, and depends on the water level but it is certainly much higher than you could expect to find in the world’s oceans to the extent that it is possible for the average person to float on the water without buoyancy aids and for that reason the shops around the shoreline certainly don’t make a fortune from selling inflatable beds!

We drove to a large lake side resort called Saltair to the west of the city which had the air of an old fashioned sea side town that was once popular but now a place well past it’s sell by date where people just don’t go any more. The unpredictable water levels have affected Saltair badly and it has also had the sad misfortune to be burned down twice. 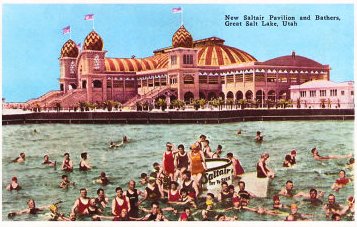 When it was first constructed it was intended to be the western equivalent of Coney Island on the east coast and was one of the very first amusement parks in the USA and for a time was the most popular family destination west of New York.  The Saltair that we visited however was much smaller than the original and had been rebuilt in 1981 following the second fire and was constructed out of a salvaged Air Force aircraft hangar.  To try and disguise it the owners had added turrets at each corner and the entrance, which gave it the rather unusual look of a middle-east mosque and which only served to give it a strange appearance that was amusing rather than impressive.  Soon after opening the waters receded leaving it high and dry and an awful long way from the new shoreline.  The car park was strangely empty and inside the building we were practically the only visitors and the exhibits were both lifeless and tired.  Outside too it was all rather sad with rows of decaying wooden pilings snaking outward toward the lake, all that remains of a railway trestle and a pier which once led to the earlier Saltair resort.

The Lake itself however was a very remarkable sight, a massive expanse of flat deep blue water and as it was early morning there was moody mist hanging over the surface that created an eerie atmosphere.   From where we were on the south shore the lake stretches for a hundred and twenty kilometres to the north and fifty to the west.

Like Loch Ness in Scotland there are stories of a Great Salt Lake Monster which began in 1877 when workers on the north shore salt flats claimed to see a creature with the body of a crocodile and the head of a horse.  They claimed that the monster attacked them one evening and they had to make a quick getaway and hide until morning but sceptics say that this creature was most probably just a buffalo cooling off in the lake.  Either that or they had been drinking moonshine whiskey.   Needless to say, we didn’t see the creature this morning. 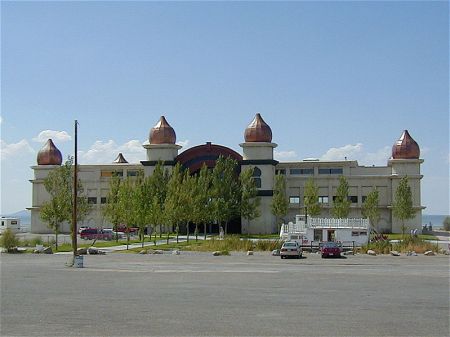