A Life in a Year – 16th October, Children’s Television 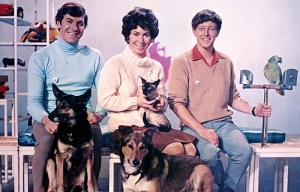 Whenever a group of fifty somethings come together it is almost inevitable that at some point the conversation will sink towards nostalgia and this in turn will at some point get around to the subject of children’s TV.

In the 1960s there wasn’t nearly as much television broadcasting time provided for kids and it was restricted to ‘Watch With Mother’, which was shown at lunch time and was aimed at the pre-school audience and then for school children there was ‘Children’s Hour’ at five o’clock or thereabouts (I say thereabouts because sometimes BBC and ITV altered the scheduling to achieve viewing numbers advantage).  This gave us enough time to walk home from school (yes, walk – shock horror), get changed and get the TV set warmed up!

Everyone remembers ‘Blue Peter’, which was transmitted twice a week on Monday and Thursday.  It was first aired on 16th October 1958 and the first two presenters were Christopher (and now for something completely different) Trace, an actor and Leila Williams, winner of Miss Great Britain in 1957.  In the 1960s of course the most memorable presenters were Valerie (here’s one I made earlier) Singleton and John (Get down Shep) Noakes.

In response to the success of Blue Peter, TV weighed in with ‘Magpie’ which had a similar format but was less bourgeois and a bit grittier.  I preferred Blue Peter but had to watch Magpie because the presenter Susan Stranks would often appear in tight tops and without a bra!

I regret my selfishness now but one programme that I didn’t care for was ‘Vision On’ which I think was shown on a Tuesday and was designed for deaf children; selfish, because this specialist programme accounted for only 10% or so of a week’s children’s television output.  I didn’t watch it because it didn’t feel as though it was for anyone but deaf children and that seems absurd now.

There were cartoons in ‘The Huckleberry Hound Show’, ‘Tom and Jerry’, ‘Deputy Dawg’ and ‘Wacky Races’; the puppet shows ‘Supercar’, ‘Fireball XL5’, ‘Stingray’ and ‘Thunderbirds; and programmes with smart alec animals like ‘Lassie’, ‘Flipper’ and ‘Skippy the Bush Kangaroo’.

There were two animal programmes that I liked, ‘Zoo Time’ with Desmond Morris which was designed to be almost completely informative and ‘Animal Magic’ which was informative and entertaining and brought a bit of humour to the zoo.  I think on balance I preferred ‘Animal Magic’ which was first broadcast in 1962 and ran for 21 years.  The presenter was the avuncular Johnny Morris. His charismatic style and genuine fondness for animals made the show an instant success as the show combined jovial voiceovers applied to various animals from Bristol Zoo with some basic educational features.

Sometimes the Television Companies showed programmes from the continent and two of my favourites were the French film ‘Robinson Crusoe’ with its distinctive and haunting theme tune and filmed on the island of Gran Canaria by the way, and ‘The Singing Ringing Tree’ which was part of the ‘Tales From Europe’ series.

‘The Singing Ringing Tree’ (was a children’s film made in East Germany in 1957 and shown in the form of a television series by the BBC. It was a story in the style of the Brothers Grimm and although it fascinated me, with its beautiful princess, talking animals, a giant fish flapping in a rapidly drying river, a beautiful white horse, a nasty dwarf, a bear in a cave, a girl in rags and an odd little tree with bells on it.  It was supposed to be a lovely old fashioned fairy tale of good triumphing over evil but I was never really able to get to the bottom of it.  It was dark, weird and spooky and I still wonder why the BBC thought that it was suitable for daytime children’s television.  Along with ‘Doctor Who’ it is the only programme that I can remember watching from behind the safety of the sofa! The comedian Paul Whitehouse once said, “The Singing Ringing Tree used to make me pee my pants when I was a kid” and he later made a special version for the ‘Fast Show’.

This was the last children’s show of the week (excluding weekends) and ‘Crackerjack’ was a sort of kid’s version of a variety show.  The shows were filmed in front of a live audience at the BBC Television Theatre and were quite manic. The format of the programme included competitive games for teams of children, a music spot, a comedy double act, and a finale in which the cast performed a short comic play, adapting popular songs of the day and incorporating them into the action. One of the most memorable games was a quiz called ‘Double or Drop’, where each contestant was given a prize to hold for each question answer correctly, but given a cabbage if they answer incorrectly. They are out of the game if they drop any of the items they are holding or receive a third cabbage. ‘’Crackerjack’ was always one of my favourites.

Children’s TV ended at around six o’clock and this was the time for the ten minute news bulletin.  Dad would be home from work by now, Mum would be putting the finishing touched to afternoon tea and we would be sent to our rooms to play so that the grown-ups could watch the TV in peace, ,soak up the day’s news and then watch ‘Crossroads’. 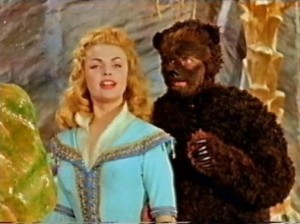