A Life in a Year – 2nd November, Motorways and Minis

In 1959 there were two important news items that celebrated significant events in British motoring.  First of all the southern section of the M1 motorway which started in St Albans in Hertfordshire and finished just a few miles away from Rugby at the village of Crick was opened on 2nd November.   The motorway age had arrived and suddenly it was possible to drive to London on a three-lane highway in a fraction of the previous time, helped enormously by the fact that there were no speed limits on the new road.

When it first opened this was practically the equivalent of a country road and it certainly wasn’t unheard of for families to pull up at the side for a picnic.  This first section was seventy-two miles long and was built in just nineteen months by a labour force of five thousand men and that was about one mile every eight days.  Compare that to the sort of productivity road builders achieve today – a twenty mile stretch of road between Spalding and Peterborough, the A1073, for example has taken nearly four years! 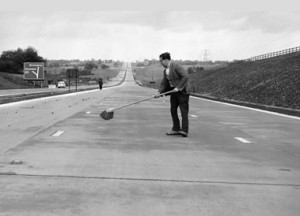 In 1959 cars were still a bit old fashioned and basic design hadn’t changed much since the 1940s but the new motorway age needed a new breed of car and in August 1959 the world saw the introduction of the Austin Seven, Morris Mini-Minor and Morris Mini-Minor DL two door saloons, all with transversely mounted 848cc engine and four speed gearbox and known collectively as the MINI!  The car was designed by Sir Alec Issigonis who had previously designed the Morris Minor and was intended as a small economic family car.  The first Mini was immediately popular and sold nearly two million units and by the time production ceased in 2000 a total of 5,387,862 cars had been manufactured.  Nearly everyone has owned a Mini at some time, I did, it was a blue 1969 model, registration BUE 673J.

Not that all of this mattered a great deal to us however because like lots of families in 1959 we didn’t have a car and dad didn’t even learn to drive until the early 1960s and mum not until ten years after that.  His first car was an old fashioned white Austin Cambridge A55, registration SWD 774, which was a car with few refinements and even lacking modern day basics such as seat belts, a radio, door mirrors or satellite navigation.  There were no carpets and the seats were made of cheap plastic that were freezing cold in winter and if you weren’t especially careful burnt your arse in the summer.  After that he had a white Ford Anglia, 1870 NX, which I always thought was a bit chic and stylish with that raking back window and big chrome front grill and after that he had a couple of blue Ford Cortinas before he moved on to red Escorts before finally downsizing to Fiestas, and back to blue again.

My first car was a flame red Hillman Avenger, registration WRW 366J, in which I did hundreds of pounds worth of damage to other peoples vehicles because it had an inconveniently high back window which made reversing a bit of a challenge for a short person.

I remember car registration numbers because this was something we used to do as children.  Car number plate spotting was a curiously boring pastime and on some days it would be possible to sit for a whole morning at the side of the road outside of the house and still only fill one page of an exercise book.  These days you would need a laptop and a million gigabytes of memory.

4 responses to “A Life in a Year – 2nd November, Motorways and Minis”