A Year in a Life – 8th November, Radio Leicester 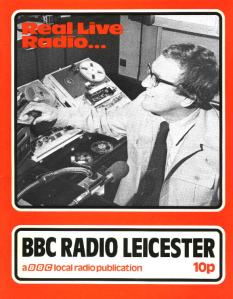 In 1967 Leicester was one of nine local authorities that agreed to fund a BBC experiment and on Thursday 8th November 1967 the people of Leicester were the first to hear this new version of an older form of radio service. BBC Radio Leicester offered really local and relevant programmes with local voices talking about local matters.

At first, the small staff of 16 men and women provided just four hours of programming each day, and there were no journalists.  All the news stories were provided by a local news agency.  Just over two years later, the experiment was declared a success. In each of the eight station areas, people said they wanted local radio to stay.

Radio Leicester turned out to be a watershed in broadcasting for my dad.  Being Leicester born and bred and with a fascination for anything about the city, especially its sport, Leicester City, Leicester Tigers, Leicestershire County Cricket Team and so on, this new radio station provided him with his greatest possible source of entertainment satisfaction.  A little while after I think he underwent a surgical procedure and was permanently attached to his transistor radio and he spent about 50% of the rest of his life listening to anything that was on Radio Leicester.

As it was the first local radio station it had a very strong transmitter and Radio Leicester could be heard probably as far away as the Ural Mountains but now everyone has local radio and the transmission strength has been so severely reduced that I struggle to pick up Leicester City match commentaries at only one hundred miles away.

This entry was posted in Age of Innocence, Childhood in the 1960s, Growing up in the 1960s, History and tagged BBC, Local Radio, Radio Leicester, Transistor Radio. Bookmark the permalink.