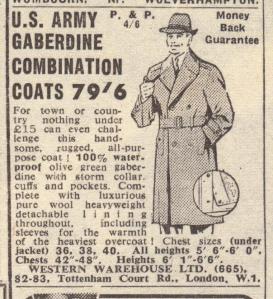 I came across these genuine clothing advertisements in a 1965 copy of the Daily Mail which reported the funeral of Winston Churchill.

In 1965  I wouldn’t have been wearing a U.S. army gabardine combination coat because that would have been nearly a quarter of dad’s weekly wage and at only eleven year’s old I would have looked rather silly in it anyway.  I like the way the man is unashamedly smoking a pipe and wearing a hat which are details that you certainly wouldn’t see nearly fifty years later.

Although I might have been unlikely to wear a gabardine raincoat I can remember having my first anorak.  Traditional anoraks were heavy, hip-length coats with a wide hood that protected the face from the wind. The Inuit peoples of the Arctic invented the anorak as wind chill protection to wear when hunting and the hood and body section of these traditional anoraks were made from animal skins lined with real fur to add extra warmth. Fish oil was used on the outside to create a water-resistant finish but I expect this made them rather unsuitable and anti-social for High Street shopping in the UK but by the 1960s they were being made from man-made quilted nylon and suddenly everyone was wearing them.

This advertisement was for the traditional zip-up anorak with bloated sleeves that swished against the body as you walked and sounded like someone sweeping the pavement.  I notice that it claims that they were used by famous winter sports skiers but it carefully doesn’t give any details because this would certainly not have been true.  Another detail in the advert is quite shocking now with a truly inappropriate option in the mid 1960s colour range.  I seem to remember that my sister had a blue one like this but I stuck out for an olive green pull over the head variety with patch pockets at the side and across the chest. 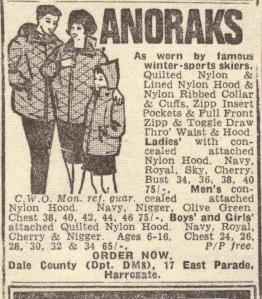 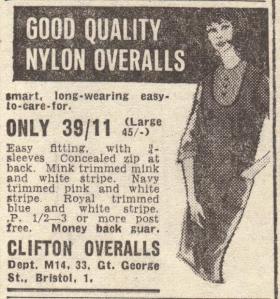 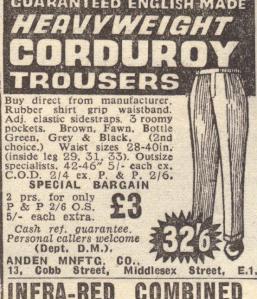 This entry was posted in Age of Innocence, Childhood in the 1960s, Growing up in the 1960s, History and tagged Anoraks, Corduroy Trousers, Newspaper adverts, Raincoats. Bookmark the permalink.