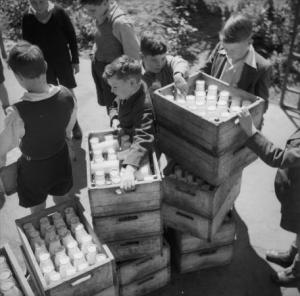 When we were young milk was delivered to the house everyday in bottles to the front door by the milkman Brian Anderson who owned the village dairy and thanks to the 1946 School Milk Act crates of it were also delivered daily to schools across the country.

After morning lessons there was break time with play and a bottle of milk for every pupil courtesy of the County Council.  Although children from poor families had previously enjoyed free school milk the 1946 School Milk Act introduced by the first woman Education Minister Ellen Wilkinson had required the issue of a third of a pint of milk to all school children under eighteen and this was a nice thought if not always a pleasant experience.

The problem was that the milk arrived at the school gate first thing in the morning and in the summer it stood outside in the sun until lunch time and by then it was warm and thick because this was full cream milk, not the semi-skimmed coloured water that we have today.  In the winter when the temperature dropped below zero it had a tendency to freeze and pop through the foil cap in an arctic lump that had to be sucked away before you reached the semi-liquid slime underneath.  No one knew about lactose intolerance in those days and it was compulsory for everyone to drain the bottle through a cheap paper straw and there were always teachers on hand to make sure that everyone finished their drink of milk.

Each bottle had a silver foil cap and the teachers encouraged us to remove these carefully rather than poking our finger through the top for two reasons – first they were sharp and you could end up with a nasty cut and secondly because the school used to collect them for charity collections – at our school usually the RNLI.

Free school milk was discontinued in 1970 by the future Prime Minister Margaret Thatcher and which earned her the unflattering nickname of ‘Thatcher, Thatcher, Milk Snatcher”, but I think she was called far worse than that later on!

Actually however she only stopped free school milk for eight to eleven year olds because Harold Wilson’s Labour Government had stopped free milk for secondary schools two years earlier in 1968 (but you’ll notice how ‘Wilson, Wilson Milk Snatcher’ doesn’t have the same newspaper headline appeal) so perhaps Oxford University was a bit mean when in 1985 it prevented Margaret from receiving an honorary degree because of her history of education spending cuts.

Free school milk is still provided to children under five and it costs £50m a year but no political party has the bottle to discontinue it for fear of bad publicity and electoral consequences.