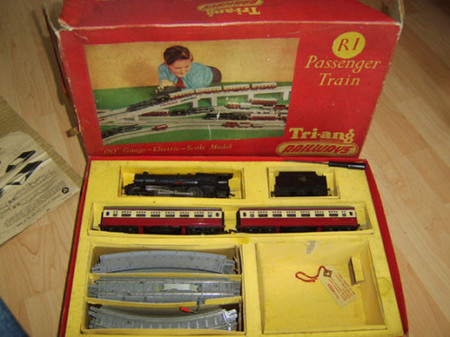 Like most boys I had a train set which was set out on a square metre of sapele board and was a simple circle of track, an engine a tender and two coaches in British Rail burgundy livery.  There was a level crossing, a station and a bridge made out of an old shoe box that dad had cut out and made himself.  He was good at making things and at about the same time I had a fort with some US cavalry soldiers that was made out of an old office filing box that he had constructed into a pretty good scale copy of Fort Laramie or wherever, later I had a replacement fort, this time from the toy shop but it was never as good as the cardboard box.  To go inside the fort was a regiment of US cavalry soldiers and to attack it were a dozen or so blood-thirsty Indians.  I also had some cowboy figures called ‘swapits’ which, as the name suggests could be taken apart and reassembled in different combinations of legs, torso and head but a lot of the little pieces went missing quite quickly.

For many years after that there were new additions to the train set until I had quite an extensive network of track and a good collection of engines and rolling stock.  But something bad happened to the train set in about 1972 when all of the engines mysteriously stopped functioning.  The reason for this was quickly discovered.  Brother Richard who has always been more gifted than me with a screwdriver had dismantled them all as part of his engineering education.  Unfortunately at this time his skills were not sufficiently developed to be able to put them back together again with quite the same level of expertise and consequently that was the end of model railways in our house. 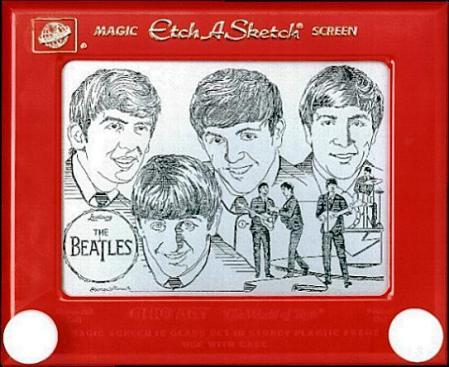 1960 saw the introduction to Britain of two new must have toys.  The first was the Etch-a-Sketch, which was a big bag of aluminium dust behind a plastic screen that you scraped doodles into, like you would on the window of a steamed-up car.  But rather than use your finger you had to demonstrate unnatural amounts of patience, perseverence and agility and twiddle two knobs which was an action that required almost impossibly high levels of eye to hand co-ordination.  Actually I always considered Etch-a-Sketch to be really hopeless and it was impossible to draw anything really creative.  The box suggested all sorts of drawing possibilities but in reality although it was alright for houses or anything else with straight lines beyond that it was excruciatingly frustrating to draw anything that anyone would be able to meaningfully identify. 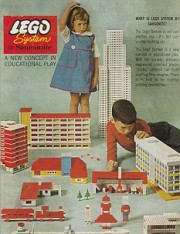 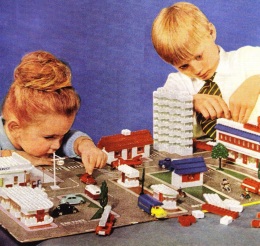 Much more important than Etch-a-Sketch was the introduction of the construction toy Lego which was seen at the Brighton Toy Fair for the first time in 1960.  Lego is a Danish company and the name comes from the Danish words ‘LEg GOdt’ meaning play well.  Now this just has to be one of the best toys ever and when it was first introduced the brightly coloured bricks sold by the bucketful.  Pre-Lego I had a construction set called Bayko, which was a set of bakerlite bricks and metal wires that could be used to construct different styles of houses but nothing more exciting than that.  Lego changed everything and the only restrictions on creativity thereafter were the number of bricks in the toy box and a child’s (or an adult’s) imagination!

Others agree with me about the importance of Lego and the British Association of Toy Retailers has named Lego the toy of the century. 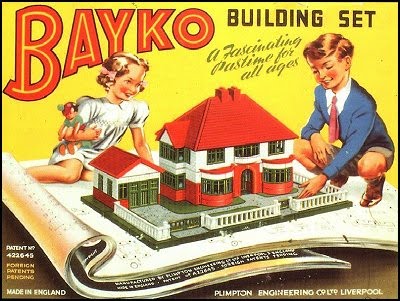 The final ‘must have’ boys’ toy was the construction set Meccano which was a model building system comprising re-usable metal strips, plates, angle girders, wheels, axles and gears, with nuts and bolts to connect the pieces together to (in theory) enable the building of working models and mechanical devices. I had a box of Meccano which, on a rainy afternoon, made you feel like a real engineer for a few hours.  Like Lego the real problem with Meccano was that almost always there were never enough parts to complete the planned ambitious project and most grand construction plans that were conceived in the mind were never fully completed by our fingers.  Like a lot of boys of my age I abandoned Meccano when plastic parts began to replace the original metal pieces because for some reason this made it seem slightly less grown-up. 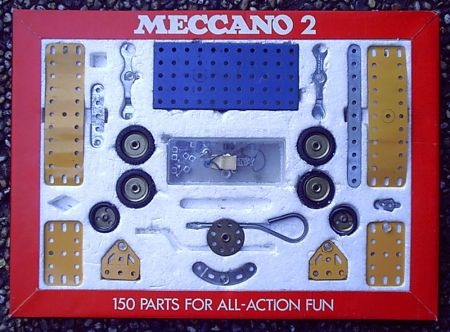 This entry was posted in Childhood in the 1960s, Children, Growing up in the 1960s, History and tagged Culture, Lego, Life, Meccano, Model Railways, Toy Box. Bookmark the permalink.