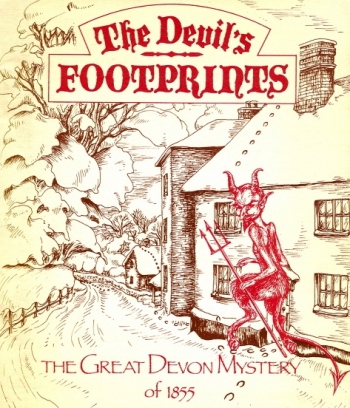 On the night of the 8th of February 1855 heavy snow fell on the countryside and small villages of South Devon. The last is thought to have fallen around midnight, and between this time and around six o’clock the following morning, something (or some things) left a trail of tracks in the snow, stretching for a hundred miles or more, from the River Exe, to Totnes on the River Dart.

The mysterious footprints have never been adequately explained.  According to contemporary reports, they went through solid walls and haystacks, appearing on the other side as though there was no barrier. The extent of the footprints may have been exaggerated at the time, or they may have been the result of freak atmospheric conditions but in truth the ‘footprints’, if that is what they were, still remain a complete mystery.

Some clergymen suggested that the prints belonged to the Devil, who was roaming the countryside in search of sinners (a great advertising stunt to fill the churches I imagine), while others rejected the idea as reckless superstition.  It is true that a feeling of unease had spread through some of the population, who watched carefully to see if the strange footprints would return.  They didn’t and after a couple of days the news spread out of Devon and made the national press and sparked correspondence in some of the leading papers including the Times.

I mention this piece of nonsense because just over forty years ago when I was about fifteen I was bought a fascinating book called ‘The Reader’s Digest Book of Strange Stories and Amazing Facts’ and the story of the Devil’s Footprints was included and quickly became one of my favourite articles.

The book was an almanac of random stories with tales of the supernatural, mythical beasts, feats of improbable strength, a glimpse into the future and was divided into chapters such as “Strange customs and superstitions”, “Hoaxes, frauds and forgeries” and “Eccentrics and prophecies.”  There were photographs of the Loch Ness Monster, Sri Lankan fire walkers and “O-Kee-Pa, the Torture Test,” where young men of the Mandan tribe of Indians endured a brutal and horrific rite of passage that culminated in chopping off their own little fingers.

I learned that people sometimes spontaneously combust, and that an Italian monk named Padre Pio suffered Christlike wounds in his hands called stigmata that never healed.  There were weird facts such as pigs being flogged in medieval France for breaking the law, and that the entire crew of the Mary Celeste disappeared one day, leaving the ship to float empty around the Atlantic. I became acquainted with Anastasia, the supposed Romanov survivor; and Spring-Heeled Jack, a demon who leapt about London in the nineteenth century, spitting blue fames in the faces of young women.

I acquired this book during my Ouija board occult dabbling days and the chapter on the supernatural I read over and over again. I was interested in the paranormal and here now was a book bearing evidence that ghosts were real and to prove it there were photographs of writings they’d scrawled on walls.  You can’t dispute evidence like that.  There was an article on the most haunted house in England and in another a photograph even showed how some ghosts could actually present their reflection on tiled kitchen floors

I used to love this book, much to the despair of my dad who considered it to be a collection of useless false drivel that was distracting me from studying for my ‘o’ levels and he was right I should have been concentrating on Shakespeare and Chaucer but for some reason Henry V and the Canterbury Tales were just not as interesting as ‘The night the Devil walked through Devon’!

Read here about the Devil’s Bridge in Wales

One response to “The Devil’s Footprints, Supernatural Tales and Tall Stories”