Auschwitz and the ‘Final Solution’ 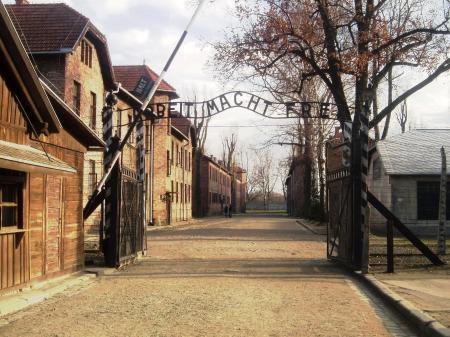 As part of their ‘Final Solution’ the Nazis planned to remove permanently anyone that they couldn’t get along with as neighbours, which, as it turned out, was an awful lot of people that meant that to achieve their hateful objective they had to dispose of people on a terryfing industrial scale and on 21st February 1940 they began preparing plans for the notorious concentration and killing camp at Auschwitz in Poland.

When I visited the place in December 2006 I wasn’t quite sure what to expect and I confess to being a little apprehensive at the beginning of the tour especially when a cold wind seemed to blow across our faces at the very moment we passed through the infamous gates of the camp; or perhaps I just imagined it?  There is a story that no birds fly across the camp but I did see a solitary crow passing by so I presumed that this was indeed just a bit of folklore.  I didn’t see any more however.

It wasn’t quite what I had expected to see, instead of the wooden barracks that I had imagined these were substantial three storey brick buildings that looked quite comfortable and this didn’t seem wholly consistent with the truth of the horrors that took place here.  One million, six hundred thousand people killed as part of the Nazi’s ‘final solution’ including one million Jews, seventy-five thousand Poles and twenty-five thousand gypsies!  I have tried to imagine that but actually I think it is impossible to imagine that.  When the camp was at its most ruthless efficient they slaughtered four hundred and fifty-eight thousand Hungarian Jews in just three months.  Just three months!  That is slightly over five thousand people a day.  I knew this of course but what I didn’t know is that the monsters actually sold them train tickets to get here and promised them a new start in life.

Amongst the exhibits were empty Zyclon B canisters, the gas used to murder the prisoners, seven tonnes of human hair from an estimated one hundred and fifty thousand people and part of a grim recycling operation to process it into army uniforms and blankets.  There were spectacles, prosthetic limbs, pots and pans, suitcases with return addresses optimistically scrawled on them for identification and most moving of all an emotional display of children’s clothes and modest possessions.  The owners of these personal belongings all died at the hands of the Nazi’s, a bunch of psychopaths, sadists and thugs all handpicked to administer and run this dreadful place.

Usually when I am travelling I like the sun to shine and today the sun did shine but this seemed to be somewhat inappropriate, this seemed to me to be a place where the sun should never shine again so that no one ever forgets the enormity of the crime.  We saw the death wall where an unknown number of people were murdered and the prison cells that were positively medieval in their cruelty; the starvation cell, the suffocation cell and the standing in a very confined space with others cell; and there was a display of photographs of the prisoners which in each case showed the dates of admission and of death, on average only three short months. 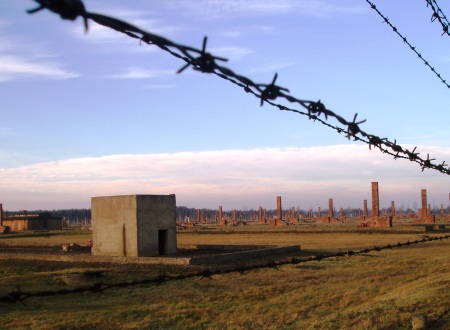 Finally we passed through the first gas chamber and crematorium where seven hundred people at a time were gassed to death and this was a horrible place, grey, grim and cold.  All of this took place less than ten years before I was born and my thoughts at this time were how lucky we have been to live a happy life.  I was bought up on tales of the war told to me by my father, but these were always gallant tales about impossibly brave paratroopers and square jawed commandos, about fearless desert rats and valiant fighter pilots, about courageous heroes and stiff upper lips, about medals and honours; I am certain that he never really understood what the war was like in eastern Europe and for the unfortunates persecuted by the Nazis.

After a short break we went to the adjacent Birkenau that was a much bigger second camp where people lived in wooden barracks and where most of the killing took place.  This was much more like what I was expecting and so much more familiar to the films and documentaries that we have all seen.  This place was stark and ugly and we saw the platform where selection took place, work camp or death, lingering misery or short relief, and looming over all of this was the watchtower that kept guard over this entire evil place.

The journey back to Krakow was a time for personal reflection and the coach was eerily quiet as I am sure each visitor tried to make sense of what they had seen.  I am not certain I was able to do that but it was a place I wanted to visit and I’m glad that I did.

4 responses to “Auschwitz and the ‘Final Solution’”