“To an American, Italian traffic is at first just down-right nonsense. It
seems hysterical, it follows no rule. You cannot figure what the driver
ahead or behind or beside you is going to do next and he usually does it!”     John Steinbeck

In Italy, traffic regulations currently in force were approved by the Legislative Decree number 285 of 30th April 1992 and are contained in the Italian Highway Code called the Codice della Strada.

Anyone visiting a busy Italian city or town however may well however dispute that there is such a thing as a highway code in Italy.  I visited Naples in 1976 and was overwhelmed by the cacophony of blaring noise and the indiscipline on the roads and even after 1992 it wasn’t any better when I went to Florence in 2007.

Once again the town resembled a racetrack and this is because despite the best intentions of the rule book Italy has some ludicrously different driving rules to the rest of Europe and the traffic was murderously hectic on this Sunday morning.

Traffic lights are a good example of these different rules because each one resembles the starting grid of a formula one Grand Prix.  At an Italian traffic junction there is an intolerant commotion with cars all impatiently throbbing with engines growling, exhaust pipes fuming and clutch plates sizzling whilst behind the wheel the driver’s blood pressure reaches several degrees above boiling point. 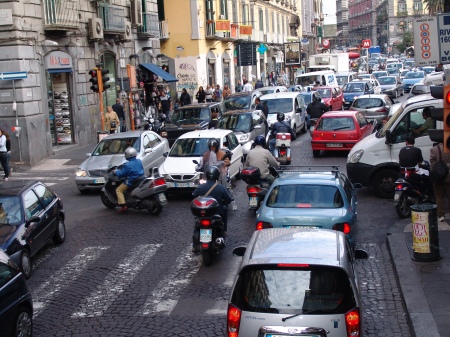 A regard for the normal habits of road safety is curiously absent in Italy so although the traffic light colours are the same as elsewhere they mean completely different things.  Red means slow down, amber means go and green means that no rules apply!  At a junction an Italian driver simply points his car at the exit he is aiming for and five seconds before the lights go green, he shuts his eyes, presses the accelerator to the floor then races forward and may God have mercy on anything or anyone in his way.

Italian drivers also have a range of additional hand signals not used in most other countries, which means that for them holding the steering wheel is a bit of an inconvenience that makes driving even more exciting.

Once in Pisa  it was just my luck to get the craziest taxi driver on the rank.  He drove at madcap speeds into the city, dodging down back streets and directing the car into impossibly tight spaces and then he rounded off this virtuoso lunatic performance by demonstrating some advanced driving skills that involved having two very loud and very animated mobile telephone conversations on two separate phones whilst steering the car with his knees. With his knees!  This man was clearly on the run from an asylum and nervous laughter only encouraged him to play some more tricks as he switched lanes and negotiated the busy traffic with careless abandon.

Interestingly the Codice della Strada prohibits the use of the horn in built up areas but this rule is treated with complete contempt and an Italian driver has to always keep one hand free for this purpose.  Once in a hotel evening meal one of the waiters said that he had seen me earlier and he had tooted his horn and waved but I hadn’t seen him.  I explained that everyone was tooting their horns so how could I possibly have picked his out from all the rest and he seemed to accept the explanation but it left me wondering if they have different horn toots for different things and I listened out for that in future for the subtle variations I but detected nothing but a blaze of chaotic sounds.

Italy’s roads are dangerous and 2004 was probably the worst year and according to EuroStat there were thirty two thousand, nine hundred and fifty-one road deaths in the EU and five thousand, six-hundred and twenty-five of them were in Italy. That is about 17%.  In the ten years up to 2004 the Italians slaughtered sixty-five thousand, one hundred and twenty five people in traffic accidents so it pays to have your wits about you when crossing the road and why if you want to be sure of avoiding death on the highway in Italy it is probably safest to visit Venice. 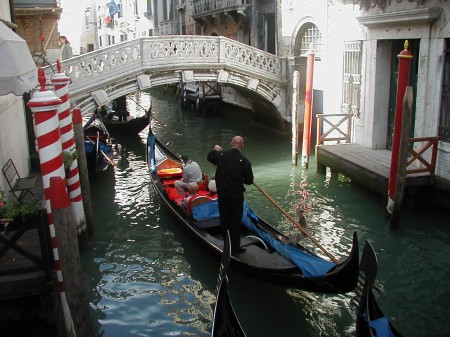