Town Twinning became a big thing after the Second World War as people sought to repair shattered relationships with their neighbours and I have often wondered what the process was for getting a twin town.

Anyway, the city of Coventry started it all off and was the first ever to twin when it made links with Stalingrad in the Soviet Union in 1944 and is now so addicted to twinning that it has easily the most of any English town or city with a massive twenty-six twins.  That is a lot of civic receptions and a lot of travelling expenses for the Mayor of Coventry.  Perhaps even more surprising is that Sherborne in Dorset, a town of only ten thousand residents has fifteen twin towns.

Rugby, my home town, twinned with Evreux in France on 3rd May 1959.  From 1975 to 1980 I worked at Rugby Borough Council and there was a strong Town Twinning Association with a regular group of Council bigwigs rotating biannually between visiting the twin town of Evreux in Normandy, France and then entertaining French visitors the following year.  In 1977 Rugby twinned with a second town, this time Russelheim in Germany, and this meant new people were required to fill the coaches and provide accommodation for visitors.  We expressed an interest in the Gallic option and in 1979 joined the twinners.

1979 was a year when the French visited the UK so we joined in the fund raising and the planning meetings in preparation.  We were excited about this cleaned the house from top to bottom, manicured the garden and prepared appropriate menus.  In 1979 I had only been to Europe twice, Italy in 1976 and Spain in 1977 and this hadn’t involved a lot of getting familiar with the locals so to have visitors from France staying in our house was a bit of an adventure.

The visitors from Evreux arrived one evening in September and we were introduced to our guests for the weekend Charles and Marie Rose Freret and we had a interesting first evening of ‘getting to know each other’  .  Luckily Charles and especially Marie Rose spoke good English so this happily meant that we didn’t have to communicate through embarrassing nods, pointing gestures and shouting but this was nevertheless an occasion when I wished that I had paid more attention to Pluto Thompson in school French lessons.

To be honest there wasn’t a lot of time for awkward or uncomfortable moments because the weekend was well planned with a civic reception, a garden party, an evening out and the inevitable visit to Stratford-upon-Avon.  The only clumsy time was when I produced a bottle of Piat D’or white wine.  I thought that this would be a winner because the adverts said ‘The French adore le Piat D’or’ but it turned out that they didn’t actually and Charles had never even heard of it.  He drank it but I don’t think he was impressed!

Playing host was good fun but it was even better of course to travel to France and be entertained in Evreux and in the following year we joined the coach outside the Town Hall and set off for the English Channel.

Charles and Marie Rose lived in a middle class suburb just outside the city and the house and the ambiance confirmed what we already knew – that Charles was a traditional Frenchman through and through, proud of the culture and the French way of life.  He knew about wine and had different bottles for each course of evening meal (and he didn’t feel obliged to drink the bottle all in one go, which I thought was strange because doesn’t wine go off once the cork has been removed?), Marie Rose knew about French cooking and prepared an excellent meal and Charles turned out to be an expert on cheese (French of course) and the precise order in which it should be eaten.

The itinerary of visits was tremendous and we visited Paris (my first time) and did the main sights including to trip to the top of the Eiffel Tower on a disappointingly misty day.  On the second day we toured the pretty town centre of Evreux, visited Monet’s delightful house and garden at Giverney and finished the day with a trip to the Palace of Versailles where in the evening there was the most spectacular fireworks and water fountains display accompanied by Handel’s Water Music.

The final civic reception was held in the countryside at a Chateaux some way out the town and there was a sumptuous buffet of dining treats including caviar on wafer thin savoury biscuits.

Now, this was still at a time when my gastronomic experience could best be described as limited and I had never had caviar before so I took two.  How I wished I hadn’t because to me it tasted awful and with my fist bite I had a mouthful of slimy fish eggs that was beginning to make me gag and it looked certain I was about to make a show of myself.  I tried to wash it down with a generous swig of champagne and somehow managed to get it past the point of no return without serious incident but this left the problem of the one and a half biscuits still on my plate.  I thought about the toilets but it would have looked odd taking my food to the gents but fortunately there was an unnecessary log fire at one end of the room so I casually made my way across to it and discreetly disposed of it in the flames.

In the following year I changed jobs and moved away to Rugby and that put an end to Town Twinning for a while until over twenty years later in 2002. 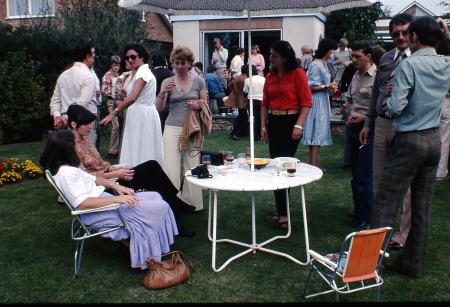