A Bonding Holiday with my Daughter

As Sally had recently broken the news about having a baby I thought it would be a good idea to have a last bonding holiday together as father and daughter before the big event as it is going to be a long time before we get this opportunity again.  I was straight to http://www.ryaniar.com and I quickly located cheap flights to Germany for 28th May.

I really had no idea where Friedrichshafen was and I really didn’t care, I was determined to have the flights so I booked them without giving the transaction a second thought.  After it had been confirmed I set out to discover where it was exactly and to learn something about our destination.  I was delighted to find that it is in the far southwest of Germany sitting alongside Lake Constance and within easy reach of its neighbours Switzerland and Austria and I quickly realised that here was a trip where I could pull in some extra countries in my quest to visit as much of Europe as possible using the low cost airlines to get me there.  After consulting the guidebooks and planning a suitable itinerary the final plan was to fly to Friedrichshafen then drive to Switzerland and visit Liechtenstein as well.

We arrived in Germany at three o’clock in the afternoon and picked up the hire car with a minimum of fuss and drove directly to the city to find the hotel Schöllhorn, which wasn’t as straightforward as it should have been but eventually we found it at the third attempt and checked in.  The hotel was a grand building in a good position with front rooms overlooking the lake but as I had booked a budget room ours had an alternative view over the car park at the back but this didn’t matter because as it was mid afternoon already we quickly organised ourselves and made our way out of the hotel and down to the lake to see what the city had to offer.

We walked for a while along the friendly waterfront and before very long selected a table at a bar with an expansive view of the water stretching across to Switzerland.  Not that we could see Switzerland however because there was a strange mist that hung over the curiously dead calm water that rather spoilt the view of the Alps in the distance.  A glance at the menu confirmed my excellent judgement in earlier purchasing a German phrase book at the airport because the menu interpretation looked especially tricky with very few words that meant anything to me.

This was a perfect spot for an afternoon sojourn and we sat and watched the lake that was busy with ferry boats crossing over to Switzerland or simply stopping off at all the little towns that border the lake and we sat and practised German fom the phrasebook and Sally impressed me with her natural grasp of the language.  Later we walked along the promenade to check the schedules for our planned trip to the other side of the water the next day.

Even on this our first day, I found that I was being forced into a reassessment of the German people.  Here in their own country they were so obliging and polite   and not at all like the loud pushy archetypes that I had encountered before, usually on holiday in Spain or Portugal where in the 1938 style of the Nazi annexation of the Sudetenland they notoriously commandeer the best pool side seats.  I have to say that it was a real pleasure to be here and not really what I was expecting, it felt relaxed, refined and cultured and I was glad of that and to have my national prejudices so quickly readjusted.

After our drink it was time for food so we returned to the lakeside and not feeling especially adventurous found an Italian restaurant with a good menu and some vegetarian options for Sally.  We were a little perplexed however when the place started to close down around us and the staff dragged buckets of water from the lake to fill the plant pots and to start to chain the tables and chairs down.  When the lights went out we felt uncomfortably in the way so we finished our drinks, paid and sauntered back into the city.  It was a lovely evening and the sky was beginning to clear and there was the occasional glimpse of a star or two and that made us optimistic about tomorrow and we returned to the Schöllhorn and as it had been a long day we went straight to bed and to sleep. 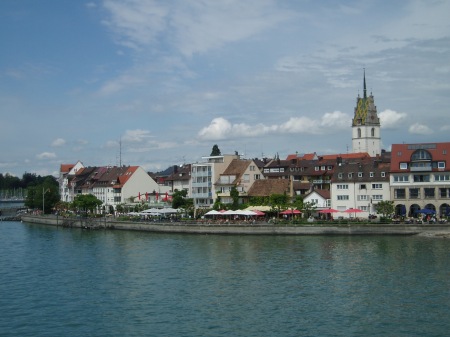