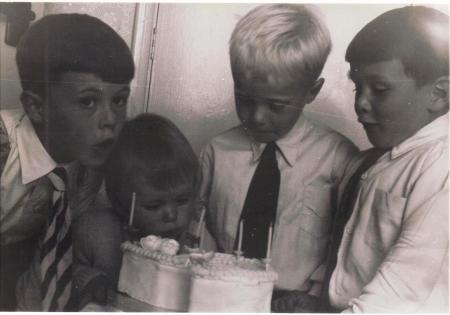 These days a children’s birthday party is sensibly more often than not held at a venue away from the family home, at a McDonalds restaurant, the local sports centre or for the rich kids in a marquee in the garden, catering is left to someone else and the entertainment is all provided.  This is sensible because it stops the house being trashed and you don’t have to be CRB checked before you can let the kid’s friends through the front door.

It wasn’t always like this and in the 1950s and 1960s the only real option for a birthday party was at home.  If it was a summer birthday you might have been lucky enough to get away with having it in the garden but generally speaking it was inside and there was an almost absolute certainty that the house was going to be turned upside-down and if you were really unlucky completely demolished.

Planning stared early with an agreement on numbers and the writing of invitation cards.  At school class sizes in the 1960s could be well over forty pupils and most children expected to invite at least half of these, for boys this meant all the rowdy boys and then the prettiest girls, I’m not sure how girls themselves made their selections, I don’t think they invited many boys.  Mum would do the menu and the catering estimates and dad would make sure that he would be working late that night.

Invites were handed out at school and this was a good way of measuring individual popularity.  If you could achieve about fifteen invites a year you were doing pretty well, only one or two and you had to worry about personal hygiene or personality issues.  It was the same sort of thing at Christmas when the classroom had a post box where on the run up to end of term we used to put all of our cards and then on the last day the box was opened and the teacher played post mistress for half an hour or so.  The pretty girls always needed a wheelbarrow to take their cards home but there were always one or two kids in the class who only got one or two and they were probably off each other!

If it was a week day the party would start soon after end of school and if it was a weekend then about mid afternoon.  Weekend parties were never popular with dads because first of all they had to be there and secondly it interfered with Grandstand on the television.  Boys never made any special sort of effort and certainly didn’t change out of their school clothes but the girls generally had a special party frock, a best ribbon for their hair and a little pastel coloured (usually pink) fine woollen cardigan.

The event usually started quite quietly and well disciplined and there was a stream of children coming to the house and handing over a birthday card and a little cheap gift and most people were well behaved while presents were unwrapped and shown around the rapidly increasing number of guests.  After that there may have been time for a quick party game but generally speaking it was straight on to the tea.

All of the food was prepared by hand and cooked by mum and there was no cheating by buying Tesco party packs or Marks and Spencer ready prepared platters.  Sandwiches were the basic ingredient of the birthday party tea, cheese, egg and spam usually and there weren’t any crisps or other such snacks because they simply didn’t exist in the way they do today.  Smith’s crisps were the variety I remember but they were unflavoured and had a little pinch of salt in a piece of blue greaseproof paper in the bottom of the bag.  There were home made cheese straws and sometimes a bit of salad but this was rarely popular.  Then there would be some home made fairy cakes, jelly and strawberry blancmange and then the birthday cake with candles to be blown out while the guests sang ‘Happy Birthday to you’ with increasingly alternative lyrics as each year went by.

After the tea the real fun began when a couple of adult helpers would organise the party games while mum had a silent break-down in the kitchen over the washing up.  Games usually started with something reasonably sedate like pass the parcel and this was good for grown–ups because it meant everyone was sitting down and under control.  After that things got a bit more boisterous as we moved on to Blind Man’s Bluff, pin the tail on a donkey, musical statues and hide-and-seek.  There was a prize for the winner of each game and as everyone got more and more excited danger levels began to rise into the red zone.  The final game was usually musical chairs; it wasn’t always intended to be the last game but this was the one where the most damage could be done with kids chasing around the house, fighting for a chair and furniture flying about the room.  As soon as the inevitable happened and something got broken or one of the girls got hurt that usually triggered the end of the party announcement.

Mum was usually glad to see the back of everyone and party guests put on the coats and shoes and were shown the back door.  And this was another thing that was different from today because parents didn’t come to collect their children and they just wandered off into the street and made their own way home.  Unbelievable that, it would never be allowed today!

Birthday parties carried on like this until we were about ten years old by which time they were becoming a bit soppy for boys and with kids growing up the potential for damage was becoming an increasing risk so parents were becoming less inclined to want to host the equivalent of a rugby scrum charging about the best room and causing chaos.  Birthday parties started to be replaced by a trip to the pictures or a football match with a couple of special friends, parents sighed with relief and the whole thing was pretty much over and a thing of the past by the time we finished junior school and moved on to secondary education.

This entry was posted in Childhood in the 1960s, Children, Growing up in the 1960s, History and tagged Birthday Party, Blind Man's Bluff, Life, McDonalds, Pass the Parcel, Travel. Bookmark the permalink.