After the creation of Budapest as one great city, there was a rush of construction and Pest was extensively remodeled in the image of Vienna, acquiring the main arterial street Nagykörút or Great Boulevard and another, Andrássy Avenue, which led out to Hero’s Square and a great park with magnificent fountains and lakes, and all of this frantic reconstruction reached a fanatical peak to coincide with Budapest’s millennium anniversary celebrations of the settlement of the Magyars in the region of 1896.

Moving swiftly on we were in full speed sightseeing mode and next it was St Stephen’s Basilica which at ninety-six metres high is the tallest building in Budapest.  Actually the Hungarian Parliament building is also ninety-six metres high which might sound a bit of a coincidence but in fact this is no accident and is quite deliberate because the number ninety-six refers to the nation’s millennium, 1896, and the conquest of the later Kingdom of Hungary in 896.  The Basilica is named in honour of Stephen, who was the first King of Hungary from 1000 to 1038 and whose mummified fist is kept in a shrine at the back of the church.

There is also a copy of his crown which is quite important to Hungary because it represents the legitimate authority to govern the country and it was first used in the coronation of Stephen which is an event that marks the beginning of Hungarian statehood.  The Holy Crown was removed from the country in 1945 for safekeeping, and entrusted to the United States government.  It was kept in a vault at Fort Knox until 1978, when it was returned to the nation by order of  U.S. President Jimmy Carter and it is now kept at the Hungarian Parliament building where it belongs.  It is a pity that Jimmy Carter doesn’t run the British Museum because then the Elgin marbles might get returned to Athens.

Seven years after Budapest was united from the three cities in 1873 the National Assembly resolved to establish a new representative Parliament Building that appropriately expressed the sovereignty of the nation. A competition was announced, which was won by the architect Imre Steindl and construction from the winning plan was started in 1885 and the building was inaugurated on the 1000th anniversary of the country in 1896 (no surprises there) and completed in 1904.  During construction the project was a major employer in the city and there were about one thousand people working on its construction in which forty million bricks, half a million precious stones and forty kilograms of gold were used.

It is the third largest Parliament building in the World after those in Roumania and Argentina.  Although it has an eastern appearance it is similar to the Palace of Westminster and was built in the same Gothic Revival style and has a symmetrical facade and a central dome.  It is two hundred and sixty-eight metres long and one hundred and twenty-three metres wide. Its interior includes ten courtyards and six hundred and ninety-one rooms.

It is set in the spacious Louis Kossuth Square and there is plenty of room to wander around and admire the magnificence of the building.  Louis Kossuth led the 1848 revolution that attempted to overthrow the Hapsburgs and there is a large monument to his memory at one end of the square.  At the other end is a statue of Imre Nagy, another Hungarian martyr and hero, who was Prime Minister during the post war occupation  years and led the ill-fated 1956 anti-soviet government after the revolution of the same year attempted to break free from Soviet control.  Nagy’s government formally declared its intention to withdraw from the Warsaw Pact and pledged to re-establish free elections.  By the end of October this had seemed to be successful but on 4th November, a large Soviet force invaded Budapest and during a few days of resistance an estimated two thousand five hundred Hungarians died, and an estimated two hundred thousand more fled as refugees. Mass arrests and imprisonments continued and a new Soviet installed government was installed and this action strengthened Soviet control over Central Europe. Nagy was executed for treason on 16th June 1958.

I have to confess that Budapest was an absolute revelation, I had not been expecting anything so grand, it was easily as good as Vienna and in my opinion much better than Prague, the scale of the city eclipses Bratislava and Ljubljana and I liked it as much as any other city I have visited.  An interesting fact is that after London in 1863 it has the second oldest metro system in the world which was opened in the famously important year of 1896.

We would have liked to have stayed longer on this side of the river and spend more time in the great city squares that surrounded the Parliament building but because the sun was shining we wanted to return to Buda to see this at its best as well.  We crossed the Chain Bridge for a final time and in Adam Clark Terrace took a ride on a funicular back to the Royal Place.  At the top we were approached by a charming man who tried to persuade us to join a two hour sightseeing tour with his specially prepared English narrative and commentary.  He was very polite and quite amusing and if we had had the time we would have willingly have joined him but I’m not sure he would have been able to keep up with us.  His tour cost three thousand Forints which sounded quite a lot but was actually only the equivalent of about £8.50.

Then it was back to the Matthias Church and this time spend more time at the Fisherman’s Bastion  which is a viewing terrace with seven towers that represent the seven Magyar tribes that settled in the Carpathian Basin in 896 and has magnificent views over the Danube looking in both directions but with an especially fine view of the Parliament building on the other side of the river.

From the Casle Hill our route took us once more past the statue of St Gellért who was allegedly murdered on this spot in the eleventh century because of his Christian beliefs.  The story goes that they put him into a barrel and rolled him down the hill and into the Danube. It could be true, but on the other hand…  Last stop was the Liberty monument again where the camera battery gave out and with no more pictures to take it was back to the bottom of the hill to start thinking about the return flight home. 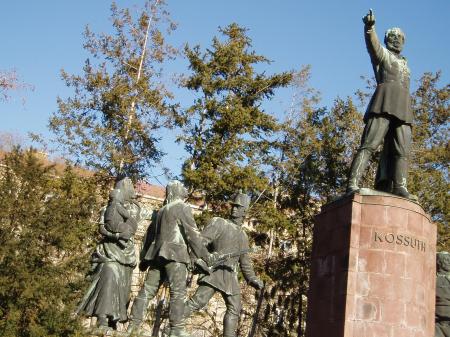 One response to “Budapest Speed Sightseeing”