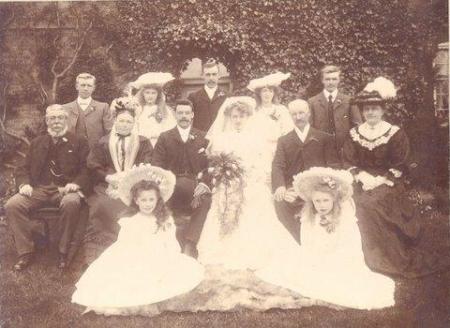 On 21st January 1970 the film ‘The Railway Children’ was released which was a film about three children growing up in Edwardian England.

The picture above was taken only fifty years or so before I was born in 1906 in the middle of the Edwardian era but seems to show a completely different way of life to even the 1950s and the happy couple are my great grandparents Joseph Insley and Florence Lillian Hill.  Joseph was a coachbuilder who was born in 1873, one of eight children to Thomas Insley, a wheelwright, and his wife Martha (nee. Johnson) who  lived in the village of Shackerstone, near Market Bosworth in Leicestershire.  Florence was one of seven children, the daughter of James and Emma Hill (nee. Marritt), from the nearby village of Newbold Verdon.

By all accounts these were two important families in their respective villages and I think the photograph gives that away.  On the back row are some of the splendidly turned out brothers and sisters, Sidney Evelyn Hill and Constance Hill, Johnson Insley and then Mabel and Perceval Hill.  I can remember visiting Uncle Johnson when I was young but most of all I remember Aunty Mabel; she never married and lived with her Pekinese dog Monty and had the habit of continually repeating ‘yes, yes…yes, yes’ whenever anyone was speaking to her, we used to call her yes, yes Mabel.  She loaned my parents the money to buy their own first house and we used to visit once a month for dad to make the agreed repayments.

On the far left, in the middle row the man with the weird beard is Thomas Insley and then Martha his wife doing her best Queen Victoria impression, the groom, Joseph, aged thirty-one and the bride, Florence (but known as Lillian), aged twenty-six and then her father, farmer James Hill and his wife Emma who was originally from Bromley in Kent. Strange to think that these people, born a hundred years or so before me at a time when Sir Robert Peel was the Prime Minister of Great Britain were my great, great grandparents.

On the front row it looks like the bridesmaids, Louise Deacon and my great grandmother’s youngest sister Dorothy who was born in 1895 and who look rather like the girls in ‘The Railway Children’.

Despite the fact that their father was away in prison (for something he didn’t do) the film gave the impression that life for a child in Edwardian England was an idyllic time but I suspect that this may not always be the case based on these two recollections from the 1920s from John Hill, a son of one of the wedding guests:

"It brought back memories of me being on the wagon and receiving forks full of hay in the early summer then corn sheaves later on. My job was to settle the offerings as best I could to prevent them slipping off before the load was full and could be tied down for the home journey over rutted fields. I was required to do this job from around the age of eight and much preferred the corn sheaves as they had a definite shape which could be held and placed.  The sheaves were about the same height as me and of course no-one wore gloves to protect against thistles   Ah those were the days......"

“The house located at the apex of the land is the house which was built for the Petcher family (my grandparents) and when completed I had my first experience of sitting in a fixed bath in a bathroom albeit the water was a bit grimy after it had been used by all the adults before Peter and I stepped in. Hot water took a long time to heat up by the back boiler in the fire grate.”

The picture below was taken in about 1910 and in the picture are Dorothy Hill on the left and my great grandmother Lillian on the right and the little girl sitting on the wall is my grandmother, also called Dorothy.