The Scrap book contains some old newspaper front pages and I will write about these later but just as interesting as the news item are the adverts on the other side.

I am thankful for that because at eleven years old I was just about at my most impressionable age and I am quite convinced that I might otherwise have been seduced by the images that cigarette advertisements used to trap teenagers into everlasting tobacco dependency and debiltating illness.

It was about this time that I enjoyed, or perhaps more correctly endured, my first cigarette.  My friend David Newman had slipped some woodbines from his dad’s half empty packet and we went into the fields behind his house at the Locks in Hillmorton for an adult smoke.  David’s dad, Harry, wouldn’t have noticed a few fags going missing because he used to smoke about sixty a day and that certainly helped to bring his days on earth to a premature ending.

Woodbines were untipped and maximum strength and we lit up and I can clearly remember trying to adopt a grown up demeanour and puffing away  without inhaling until an unfortunate combination of sucking in and speaking at the same time involuntarily drew the foul vapours into my lungs, filled my brain with noxious gasses and made me giddy and unsteady.  I literally fell over as though someone had punched me in the head, turned an unpleasant shade of green and was violently sick, much to the amusement of my pals who simply stood around giggling.

I tried smoking a few more times after that, as we all did, but I have never forgotten that thoroughly unpleasant experience and gladly never became a real cigarette smoker ever after that. 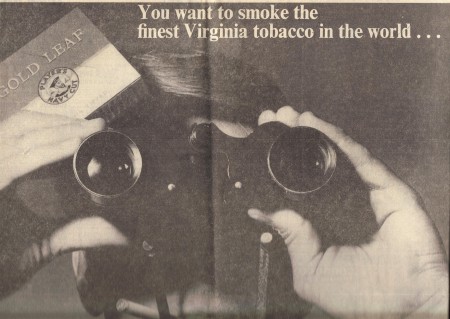 These newspapers advertisements are from the Daily Mail on Saturday 30th January 1965.  Tobacco advertising in newspapers was not banned in the United Kingdom until July 2001.

This entry was posted in Childhood in the 1960s, Growing up in the 1960s, History and tagged Addiction, Cigarette Advertising, Embassy Cigarettes, Newspaper adverts, Woodbine Cigarettes. Bookmark the permalink.