From the scrapbook these first two pictures are news cuttings from July 6th 1963 which reported an assassination in the United States.

Robert Francis Kennedy, affectionately known as Bobby, was a prominent and popular politician, a Democratic Senator from New York, and a noted civil rights activist.  An icon of modern American liberalism, he was a younger brother of President John F. Kennedy and acted as one of his advisers during his presidency when from 1961 to 1964 he was the United States Attorney General.

Following his brother John’s assassination in 1963, Kennedy continued to serve as Attorney General under President Lyndon B. Johnson for nine months but in September 1964 he resigned to seek the U.S. Senate seat for New York, which he won in November and within a few years he publicly split with Johnson over the Vietnam War.

In March 1968 Kennedy began a campaign for the presidency and was a front running candidate of the Democratic Party. In the California presidential primary he defeated Eugene McCarthy, a fellow U.S. Senator from Minnesota. Following a brief victory speech delivered just past midnight in the ballroom at The Ambassador Hotel in Los Angeles, Kennedy was assassinated.  Leaving the ballroom, he went through the hotel kitchen after being told it was a short cut, despite being advised to avoid the kitchen by his FBI bodyguard. 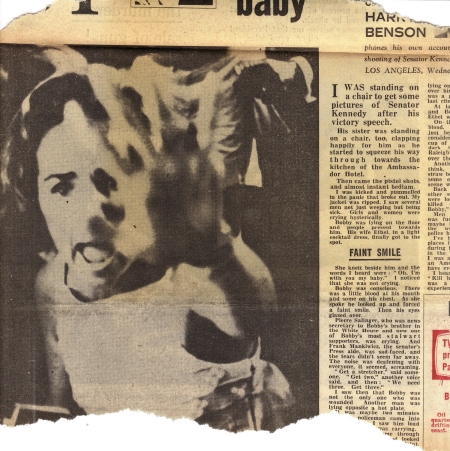 In a crowded passageway, Sirhan Sirhan, a twenty-four year-old Christian Palestinian-American (who felt betrayed by Kennedy’s support for Israel in the June 1967 Six-Day War), opened fire and shot Kennedy three times.  Following the shooting, Kennedy was rushed to Los Angeles’s Good Samaritan Hospital where he died early the next morning.  He was forty-three years old and America was poorer for his passing.  Later in the year the Republican Richard M. Nixon was elected thirty-seventh President of the United States.

The assassination of the younger Kennedy followed another high profile shooting in April of the same year.  Martin Luther King Jr. was an American clergyman, activist and prominent leader in the African American civil rights movement.  In 1964 he became the youngest person to receive the Nobel Peace Prize for his work to end racial segregation and discrimination through civil disobedience and other non-violent means. By the time of his death in 1968, he had refocused his efforts on ending poverty and by opposing the Vietnam War. He was assassinated on April 4th 1968, in Memphis, Tennessee by James Earl Ray.

In late March King went to Memphis in support of the black sanitary public works employees who had been on strike for higher wages and better treatment. King was booked in room 306 at the Lorraine Motel and just after six o’clock he was standing on the balcony of his room when a single shot rang out from a sniper’s rifle. The bullet entered through his right cheek, smashing his jaw, then travelled down his spinal cord before lodging in his shoulder.  He was pronounced dead just over an hour later.

The assassination led to a nationwide wave of riots in more than one hundred cities. Presidential candidate Robert Kennedy was on his way to Indianapolis for a campaign rally when he was informed of King’s death. He gave a short speech to the gathering of supporters informing them of the tragedy and asking them to continue King’s idea of non-violence. President Johnson declared April 7th a national day of mourning for the civil rights leader 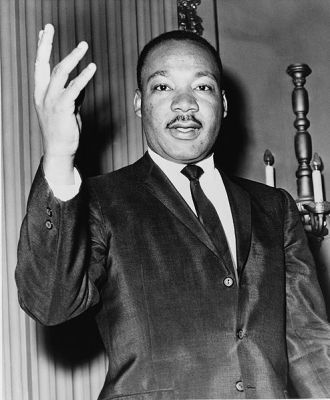