When I was a boy in the 1960s television sets were rather basic and only received two channels BBC and ITV and the signal was received via a large ‘H’ shaped metal aerial, usually bolted on to the chimney.  Just turning them on was quite a long process because instead of today’s micro chips, televisions had an antiquated system of valves, wires and resisters and these took some time to ‘warm up’.  After a minute or so you would get sound and then after another minute or so (if you were lucky) a grainy black and white picture with flickering horizontal lines would slowly start to appear.  Most television sets needed about fifteen minutes to warm up, I seem to remember.

Today, modern slimline sets are useless for putting ornaments on top of, but in the 1960s they were a big piece of wooden furniture just right for picture frames, vases and holiday mementoes so it was always quite accurate to say ‘Isn’t there a lot of rubbish on the TV!’

Television sets were always breaking down as well, half way through a programme there would be a ‘PING’ and the picture would disappear into a bright white spot in the middle of the screen like a bright star falling into a black hole and that was it until the television repair man responded to request to come by and fix it by replacing the broken tube in the back, which was a bit like replacing a broken light bulb.  This wasn’t easy either because we didn’t have telephones so someone had to get on their bike and go to the television repair man’s shop to report the fault and make the request.

There was excitement on 20th April 1964 because on that day BBC2 became the third British television channel but unlike the other channels available at that time was broadcast only on the 625 line Ultra High Frequency system, so was not available to viewers with 405 line Very High Frequency sets. This created a market for dual standard receivers which could switch between the two systems and anyone who wanted to receive the new channel was obliged to go to the expense of upgrading their television sets. 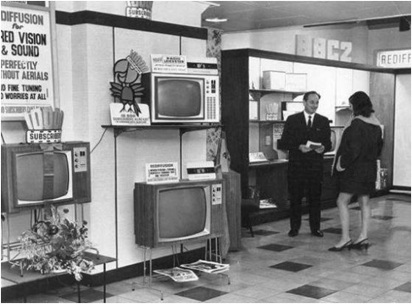 This sort of thing still goes on today.  Last year I was looking for a new computer and was advised that I would have to buy a PC with an updated operating system as my old Sinclair ZX81 was no longer in production.  This sounded all well and good until I was told that I would have to replace most of my software as well because it would be incompatible with the new operating system.  What a con!

On the subject of computers the computer language BASIC was also first introduced in 1964, which was a real breakthrough and led to the greater accessibility and later the introduction of home computers.