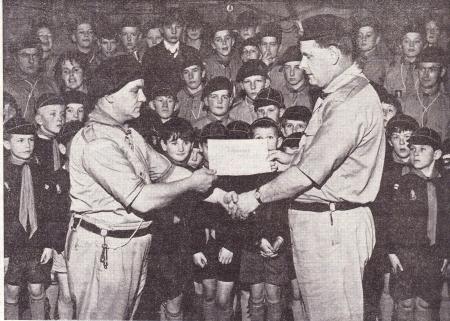 The Boy Scouts movement began in 1907. Robert Baden-Powell, a Lieutenant General in the British Army who had served in India and Africa in the late nineteenth century published ‘Scouting for Boys’ and held the first Scout camp at Brownsea Island in Dorset.

Since his boyhood, he had been fond of woodcraft and military scouting, and therefore, as part of soldiers training he showed his men how to survive in the wilderness.  He believed that it taught them to develop independence and to think for themselves, rather than just blindly follow orders and so towards the end of his military career he wrote the principles of Scouting in his book  and in so doing started the Scouting movement.

I joined the Wolf Cubs when I was seven years old and after I had passed all the tests, had a sleeve full of badges and received my Leaping Wolf Certificate moved up to the Scouts on 25th May 1965 when I was eleven.  At first I was in the Paddox Troop but later transferred to the Hillmorton, which was good for me because dad was the Scoutmaster, which gave me a bit of an advantage when it came to passing tests and getting more badges.

I liked the Scouts and the quasi-military organisation that came with it with the uniforms and the kit inspections, ‘Bob-a-Job‘ week when you could go around intimidating people for money, the law book and solemn promise and the fact that I could legitimately carry a hunting knife on my belt without being challenged; it was a bit like the Hitler Youth Movement but without the nastiness!   My only regret about the uniform was that by the time I was in the scouts that old pointy khaki hat had been replaced by the green beret; I always lamented the passing of that hat. 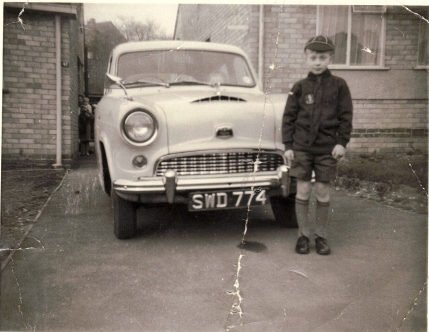 Being in the Scouts was genuinely good preparation for later life because it taught discipline, purpose and respect and some truly useful skills like first aid and survival, using an axe and a compass and lighting fires without the aid of a cigarette lighter.  Looking now at the Scout progress card however there is one thing I’m not so sure about and that is stalking.  In the Scouts you got a badge for being good at that but these days that sort of thing is likely to land you in a whole lot of trouble!

And it wasn’t just stalking because lots of things about the 1960s were more casual than they are now and whilst it seemed normal at the time I suppose today this might be interpreted as naïve.  No one questioned the motives of people who gave up their time to be Arkela or Baghera in the Wolf Cubs, Skip or Bosun in the Scouts because these were decent people who gave up their time for the benefit of others.

They certainly didn’t have to have checks by the Criminal Records Bureau and there was no sex offender’s register to refer to before they were allowed to do it, they were just good men and women, like my dad, who volunteered because they had a sense of duty and because they enjoyed doing it.

Even Robert Baden-Powell’s sexuality has been brought into question by modern biographers, who claim to have found evidence indicating he was attracted to boys but this has never been proven and was probably just a mischievous attempt to discredit a genuine British boys’ hero. After all, no one is perfect, Winston Churchill wasn’t perfect, Nelson Mandela wasn’t perfect.

Maybe however Mahatma Ghandi was?

More recently, following BLM, Baden-Powell has been accused of being a racist and some want his statue removed.  These are people from overseas who chose to live in UK and are welcomed here but then seek to change our heritage and history.  Baden-Powell is as important to us as Cecil Rhodes, Edward Colston and Winston Churchill and if people don’t like it then then they are just as welcome to leave.

In 1899 during the second Boer War Baden-Powell was promoted to be the youngest colonel in the British Army and became famous for resisting the siege of Mafeking when the town was surrounded and outnumbered by a Boer army of eight thousand men but which, under his command, withstood the siege for two hundred and seventeen days until relieved.

Other interesting badges were backwoodsman, explorer (but our troop never got sent to the Amazon or anywhere else remotely interesting) and a woodcraftsman, but I don’t think I managed any of those.  I’m fairly sure that I didn’t manage the aircraft modeller either and it didn’t help that my dad was giving out the badges and he had obviously seen my hamfisted attempts at assembling the Avro Lancaster Airfix kit!

When you weren’t getting badges scouting was good for toughing you up.  I can recall my first camp in 1965 when I was eleven when I spent my first time away from home and my parents.  By the second day I was so desperately home sick that I was feeling really ill with what felt like a big groaning hole in my stomach.

The Scoutmaster, Mr Pointon, or Skip, took me aside and gave me a good talking to about growing up, not behaving like a girl and enjoying the experience and I don’t know how he did it but in a matter of just a few minutes he removed my anxiety and my tears and I was back with the rest of the boys digging out latrines and cooking sausages over an open fire.

I can still recall the conversation as one of life’s defining moments when he explained that if I gave up and went home everyone would think that I was a big sissy and I would probably be dismissed from the troop with dishonour and someone would break my staff in two over their knobbly knee!  Anyway next day was parent’s visiting day and it never occurred to me for one moment to pack up my sleeping bag and groundsheet and go home early. 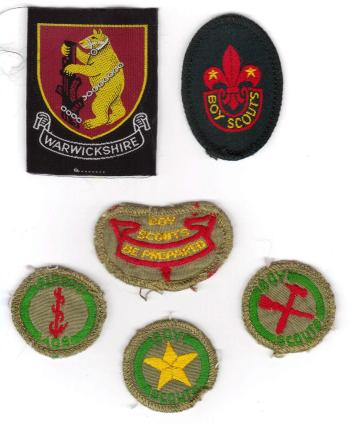 As well as the training and the tests there were a lot of games as well.  British Bulldog was a good toughen you up sort of game, which is probably not allowed anymore because it was a bit rough and inherently dangerous.  It started with one poor boy, usually the smallest, being picked out to stand at the bottom of a hill while the rest of the Troop charged down and through with the objective of getting to the other side without being caught and wrestled to the ground.  This was the job of the unfortunate boy in the middle who had to intercept one of the charging boys, pin him to the floor and shout British Bulldog 1-2-3.  If he was sensible the little boy in the middle would try to intercept the next smallest boy and so on.  This boy then joined the first at the bottom of the hill and the rest charged again.  This carried on until only one boy remained who had avoided being caught and mugged and as he was stretchered off and taken to the infirmary everyone cheered and he was declared the winner.

Boys stayed in the Scouts until they were sixteen but I never saw it through to the end, dad fell out with the Group Scout Master, Harry Newman in 1969, walked out of a meeting and never wiggled his woggle again and that November I discovered girls and that hanky-panky was more fun than gin-gan-gooly and that was goodbye to the Scouts, which was a shame because I was only a couple of tests away from my First Class Scouts badge at the time and I  never got to go on to the Seniors.