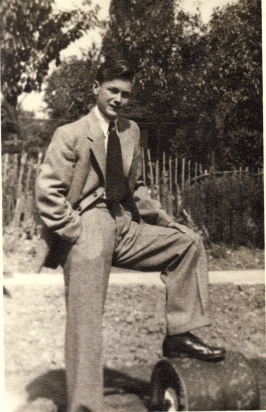 March 27th is a very special day to me because in 1932 that was the day that my dad, Ivan Petcher was born.  He was the sort of man that you hope to be like when you grow up and then wish you had been like when you are old.

I don’t know anything about his childhood of course and there is no one to give me any clues so my story fast-forwards to 1947 and the year he met my mum.

From the way dad used to talk about being a teenager I have always imagined the post war years to be an almost idyllic existence, Enid Blyton sort of days with long hot summers, blue skies, bike rides, ripping-yarn adventures and picnics, where young people were polite and had good manners and didn’t spend their evenings hanging around Tesco Express with a bottle of cider, frightening the old folk and no one had heard of the concept of anti-social behaviour. 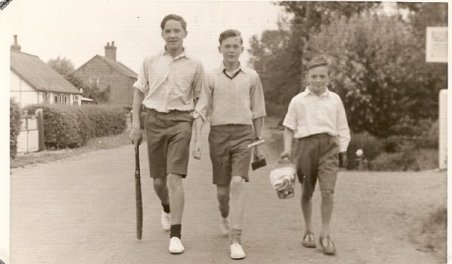 These were surely days of optimism with a country led by a Labour Government that had been elected in the summer of 1945 with a landslide majority and a promise to make everything better and which had embarked on a radical programme of nationalisation including coal mining, electricity supply and railways.

These were the days of the new National Health Service and the Welfare State all based on the optimistic principles of socialism.  And to add to all this good news the United States announced the Marshall Plan to pay for the reconstruction of Europe and that meant over three billion dollars was on the way to the United Kingdom to rebuild its bombed-out cities and its shattered economy.

This was the year of the inauguration of the United Nations which meant peace for ever more and the year that Princess Elizabeth married Prince Mountbatten.

Life was not so idyllic however in the big cities just after the war so I suppose it was nice to have a holiday and that summer mum left London for a few days with a friend in Rushden in Northamptonshire and at some point during that week she met my dad.  He was sixteen but looked younger, he hadn’t finished growing so was still quite small, his nickname was Pid as in little piddy widdy, and he he had boyish face and an impish grin with piercing cobalt blue eyes and a distinctive hairstyle with a fringe that flopped over his forehead in a Hugh Grant sort of way.

He obviously made an immediate impact on the young girl visiting from London and they spent the next sixty years together.

Not straight away of course because his new girlfriend had to go back to London to finish school and here is something else that I find absolutely charming.  These were days before mobile phones, skype and instant messaging, even before regular telephones so the only way they had of keeping in touch and keeping the romance going was by sending each other letters and photographs.

They kept this up for three years before dad was called up for national service in the RAF and he moved to London where he stayed until they married in 1953.

In 1948 dad left school and went to work for his father in the family business, a grocery store in Rushden, but they sold that sometime at the end of the decade and they all moved to Leicester and dad got his first proper job at Jessops.  I don’t know how much he earned, it couldn’t have been a lot, but from photographs it would seem that he spent quite a lot of it on clothes and he was always a smart, well turned out young man with an impressive wardrobe.

The picture above was taken in 1947 and his clothes look a bit shabby and worn through and they are in total contrast to the one below taken two years later on holiday in Skegness.  It’s a bit of a surprise to me because I don’t remember him being particularly interested in clothes and he would make most things last much longer than they could be reasonably expected to but for a couple of years in the late 1940s he obviously cared a lot about his appearance.  Or perhaps, judging by how much he had grown in two years, replacement clothes were a regular necessity during that time.

I like this picture, dad was eighteen and looks smart, self assured and full of confidence, mum was sixteen and looks really happy to be with this really special man.