Age of Innocence – 1958, The Cod Wars with Iceland

In 1958 Britain went to war – this time with Iceland.  The First Cod War lasted from 1st September until 12th November 1958 and began in response to a new Icelandic law that tripled the Icelandic fishery zone from four nautical miles to twelve to protect its own fishing industry.

The British Government declared that their trawlers would fish under protection from Royal Navy warships in three areas, out of the Westfjords, north of Horn and to the southeast of Iceland.  All in all, twenty British trawlers, four warships and a supply vessel operated inside the newly declared zones.  This was a bad tempered little spat that involved trawler net cutting, mid ocean ramming incidents and collisions.  It was also a bit of an uneven contest because in all fifty-three British warships took part in the operations against seven Icelandic patrol vessels and a single Catalina flying boat.

Eventually Britain and Iceland came to a settlement, which stipulated that any future disagreement between the two countries in the matter of fishery zones would be sent to the International Court of Justice in The Hague and the Icelandic Minister Bjarni Benediktsson hailed the agreement as “Iceland’s biggest political victory.“ 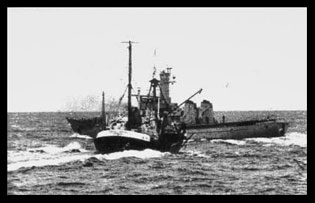 But it wasn’t the end of Cod Wars because there was a second in 1972 and a third in 1975 when on both occasions Iceland further extended their territorial fishing waters without consultation and continuing to protect these is what keeps Iceland from joining the European Union even today.

I had no idea that when I visited Iceland that I was now there as a resident of the English fishing town of Grimsby which was once recognised as the largest and busiest fishing port in the world. The wealth and population growth of the town was based on the North Sea herring fishery but this collapsed in the middle of the twentieth century and so diversified to distant water trawler fishing targeting cod in the seas around Iceland.  The concessions that Britain made to Iceland as a result of the Cod Wars which put these fishing grounds off limit destroyed the fishing industry in the town.  It is said that many men who survived the sea came home without jobs and drowned in beer.

Today Grimsby is dominated by the fish processing sector rather than the catching industry. Processors are mainly supplied by over-landed fish from other UK ports and by a harsh twist of fate containerised white fish from Iceland.

There is a National Fishing Heritage Centre in Grimsby which is a museum including a visit on board a real Grimsby Trawler – The Ross Tiger.  It’s a museum well worth visiting and the last time that I went I learnt from the guided tour that ironically Grimbarians don’t particularly care for cod anyway and have a preference for haddock which they consider to be a superior fish!

It wasn’t only Grimsby that was adversely affected by the outcome of the Cod Wars and across the Humber Estuary the fishing industry in the city of Kingston-upon-Hull  was similarly devastated by the capitulation of the UK Government and also went into dramatic and irreversible decline.

I have often wondered however what the process was for getting a twin town. Perhaps it was like the draw for the third round of the FA cup when all the names go into a hat to be drawn out with each other, or perhaps it was like the UCAS University clearing house system where towns made their preferred selections and waited for performance results to see if they were successful, perhaps it was a sort of international dating service and introductory agency or maybe it was just a nice place where the Mayor and the Town Clerk rather fancied an annual all-expenses paid trip!

Anyway, the city of Coventry started it all off and was the first ever to twin when it made links with Stalingrad in the Soviet Union in 1944 and is now so addicted to twinning that it has easily the most of any English town or city with a massive twenty-six twins.  That is a lot of civic receptions and a lot of travelling expenses for the Mayor of Coventry.  Earlier this year I visited another of Coventry’s twin towns – Warsaw in Poland.

Other significant events of 1958 included a revolution in Iraq that overthrew the monarchy, murdered the King and triggered years of instability in the Middle East which continues today; Charles de Gaulle became President of France, which was bad news for those wanting to join the Common Market and Nikita Khrushchev became President of the USSR, who although a liberal by Communist standards was the man who would later approve the construction of the Berlin Wall.