A Life in a Year – 16th February, A Walk in the Black Forest and Weiberfastnacht

Because Easter and therefore Lent are a moveable feast in the Christian calendar I am cheating here because I cannot really pin this story down to a precise date.

The timing of Easter seems somewhat confusing because it is not fixed in relation to the civil calendar as for instance is Christmas Day or my Birthday.  Easter falls at some point in a thirty-five day period sometime between late March and late April each year and the exact date is determined by the cycle of the moon.  After several centuries of disagreement, and prompted by the Roman Emperor Constantine in the year 325 to sort things out, all churches accepted the basis of the Alexandrian Church that Easter is the first Sunday after the first fourteenth day of the Paschal Full Moon that is on or after the ecclesiastical vernal equinox.  To you and me this is the first Sunday after the first full moon following the spring equinox which is that moment in time when the centre of the Sun can be observed to be directly above the equator.

When I was a boy my parents had an LP record by Bert Kaempfert.  He was a German band leader who was quite popular in the 1960s.  They liked it!  One particular tune that I can remember distinctly was a jaunty little melody called ‘A walk in the Black Forest’ and in 2008 I visited Baden-Baden and on one day planned to do just that.

It was a fine morning with a perfectly clear blue sky, just the way I like it, so after a substantial breakfast at the Hotel Merkur it was out of Baden-Baden in an easterly direction heading for the town of Gernsbach about ten kilometres away.  It was early and the town was quiet with just a few people on the way to church and what was interesting that the streets were all decorated with home-made bunting all made from old rags and scraps of clothing but with no real clue to what it was all about.

The children were all in fancy dress, the men were dressed like Noddy and Big Ears with elaborate wooden masks and the women wore colourful medieval style dresses.  It all looked a bit pagan to me, which I suppose it is really, and reminded me of the film ‘The Whicker Man’ when villagers in fancy dress sacrificed a stranger.  With that thought rattling around my head I remained alert to any threatening behaviour.  There was none of course, this was all a lot of good fun and it did explain the carnival bunting in Gernsbach and I discovered later that this is the festival of Fastnacht which is a carnival in Alemannic folklore that takes place in the few days before Lent in Southern Germany, Switzerland and Alsace.

The Alemanni were German tribes who lived in this part of Europe nearly two thousand years ago and this area remains characterised by a form of German with a distinct dialogue called Alemannic.  The celebration literally means ‘Fasting Eve’ as it originally referred to the day before the fasting season of Lent.  The schools are all closed for this festival and all over the Black Forest there are six days of parties and making merry.

At the community centre everyone was shoving down platefuls of food and consuming lots of drink.  A sort of doughnut seemed to be popular and these I learnt were called fasnachts and are a traditional fatty treat that are produced as a way to empty the pantry of lard, sugar, fat and butter, which are forbidden during Lent.  This is a catholic tradition but in protestant England we call this Shrove Tuesday and serve pancakes instead of doughnuts, it is much the same thing.

This festival is also called ‘Weiberfastnacht’ or Women’s Carnival on account of the fact that tradition says that on this day women take control of local affairs.  I might be mistaken but I was under the impression that this was every day not just once a year. 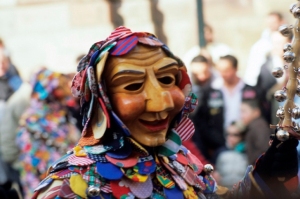