A Life in a Year – 3rd November, Florence and the Ponte Vecchio 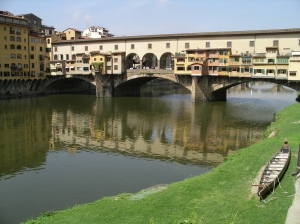 The Ponte Vecchio that crosses the river Arno in Florence is the oldest bridge in Tuscany and by happy chance the only one in the city that, allegedly due to a direct order from Adolph Hitler himself, wasn’t blown up by the retreating Germans as they cleared out from Florence in their withdrawal from Italy during the Second-World-War.  Knowing how the Germans were fond of blowing things up that must have been a one-in-a-million fluke!

The first bridge on this site was built a long time ago by the Romans and was constructed of wood on piers of stone.  It was ruined in 1117, reconstructed soon after but destroyed again in 1333 by flooding and then rebuilt once more in 1345, but this time more sensibly in stone.  Due to the high volume of traffic using the bridge, a number of shopkeepers set up shop to catch the passing trade. The first merchants here consisted primarily of blacksmiths, butchers, and tanners catering mostly to travelling soldiers who were passing through but when the Medici family moved into Florence bringing with them vast wealth and an appreciation for the finer things in life they promptly cleared the bridge of all the dirty trades, that were probably a bit of an eyesore anyway, and certainly responsible for polluting the river below.

They replaced them with goldsmiths and more similar upmarket shops and today it remains lined with medieval workshops on both sides with some of them precariously overhanging the river below supported only by slender timber brackets.  A number of these shops had to be replaced in 1966 when there was a major flood on November 3rd that consumed the city and damaged some of them but this time was unable to destroy the bridge itself.  The flood story is an interesting one and a good account can be found at

Running along the top of the bridge is a corridor that the Medici had built so that they could cross the river without having to mix with the riff-raff below and is now an art gallery.  When we visited the bridge it was busy with street traders and shoppers and the ever-present scrounging beggars of course.  Along the bridge there were many padlocks locked to the railings and especially in the middle around the statue of the Florentine sculptor, Cellini.

This, I found out later, is a lover’s tradition where by locking the padlock and throwing the key into the river they become eternally bonded.  This is an action where I would recommend extreme caution because it sounds dangerously impulsive to me; I think I would further recommend taking the precaution of keeping a spare somewhere in case I needed it later.  Apparently all of these love tokens do lots of damage to the bridge and thousands of padlocks need to be removed every year.  To deter people there is a €50 penalty for those caught doing it and that is a much higher price than I would be prepared to pay for eternal bondage!

Actually, it may be that there is some truth in this tale because according to ‘Eurostat’ even though the divorce rate has doubled in the last five years Italy has one of the lowest rates in the European Union.  Sweden has the highest and although I don’t know this for a fact I’m willing to bet that across all of Europe the Vatican State probably has the absolute lowest!

A day trip to Florence

Posted in Age of Innocence, Growing up, History