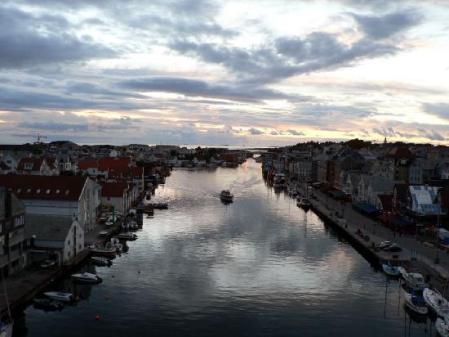 One of the reasons that we have tended to avoid travelling to Scandinavia is because of the notoriously high cost of living and the lofty prices relative to southern and eastern Europe but with flights at just £12 return (ok, plus the ludicrous £10 administration fee of course) we calculated that we could afford a couple of days of sky high northern European alcohol and restaurant prices without too much pocket pain.

The reason that Norway in particular is so expensive is that after World War Two, thanks to shipping, the merchant marine industry and a policy of domestic industrialisation the country experienced rapid economic growth.  Then, from the early 1970s, there was further accelerated growth as a result of exploiting large oil and natural gas deposits that had been discovered in the North Sea.  And not being in the European Union probably helps because on 25thSeptember 1972 the Norwegians rejected membership in a referendum.

Today, as a result Norway ranks as the second wealthiest country in the world in monetary value, with the largest capital reserve per capita of any nation.  It is the world’s fifth largest oil exporter, and the petroleum industry accounts for around a quarter of its gross domestic product. Norway has rich resources of oil, natural gas, hydroelectric power, forests, and minerals, and, after the People’s Republic of China is the second largest exporter of seafood in value.  Following the financial crisis of 2007–2010, World bankers declared the Norwegian krone to be one of the most solid and reliable currencies in the world.

Because of this happy position Norway is one of the priciest countries to live in or visit and regularly features in the top five places where you can quickly run up an overdraft.  For residents a high proportion of income is spent on housing and the monthly groceries for example for a typical family costs roughly £1,000. For Visitors dining out is an expensive luxury and a typical three star hotel in Oslo costs a whopping £150 a night, starting at the smallest hotel room and definitely without a balcony or a view.  Alcohol, however, is the real killer (financially not medically) because the Government slaps on punitive taxes to stop people from drinking and the price of a bottle of spirits is four times that of the United Kingdom.

It’s not all bad news for Norwegians however because high prices go hand in hand with the country’s high standard of living. Hourly wages are extremely high to attract workers that would get the same pay in Norway’s oil or fishing industry and consequently products in the shops and supermarkets are expensive but, to Norwegians, their pricey lifestyle is just something that they have come to terms with.

The prices were not really a surprise and we could tell of course that we were in a special place because from 2001 to 2007 Norway was ranked highest of all countries in human development and, overtaken briefly for a short time by Iceland, then again in 2009 and 2010.  The Index ranks countries by level of ‘human development’ and the statistic is composed from data on life expectancy, education and per-capita gross national income.

Also in 2010, as well as being top in the Human Development Index, the World Economic Forum deemed Norway the fourteenth most competitive country in the World and in a separate exercise the country was rated the fifth most peaceful country in the World in a survey by Global Peace Index.  New Zealand was top and not unsurprisingly Iraq bottom.

Norway is a parliamentary democracy and constitutional monarchy, King Harald V is the head of state and according to the Democracy Index Norway is also the World’s most democratic country.  The index is compiled by the United States based Economist Intelligence Unit and measures the state of democracy in one hundred and sixty-seven countries and is based on sixty indicators grouped in five different categories: electoral process, civil liberties, functioning of government, political participation and political culture.  No surprises again down at the bottom but this time it was North Korea.

But let me now bring the Norwegian people back to earth and remind them that, despite these impressive successes and accolades, the country also holds the unfortunate distinction of having scored the most ‘nul points’ in Eurovision Song Contest history – four times in all, and that is what I call humiliating. They have also been placed last ten times, which is also a record.

Posted in Growing up in the 1960s, History, Holidays, Technology