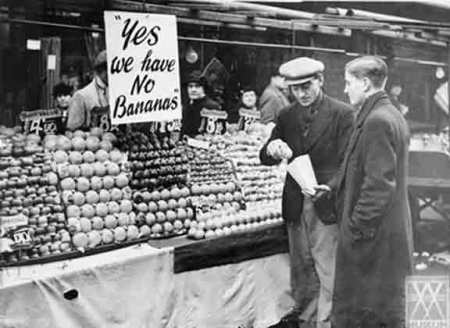 This seems almost impossible to believe now but it was only in 1954, the year that I was born, that war time rationing in Britain was officially ended.

It began in January 1940 when due to severe food shortages and heavy convoy losses in the North Atlantic, bacon, butter and sugar were rationed and this was followed soon after by meat, tea, jam, biscuits, breakfast cereals, cheese, eggs, milk and canned fruit.  As the Second-World-War progressed, most kinds of food came to be rationed along with clothing and petrol.

My parents were issued with a ration card for me but never had to use it because it all stopped three weeks after I was born on 4th July. It might have gone on longer but for the work of Gwilym Lloyd George, the son of David Lloyd George, who was the Minister of Food from 1951 to 1954 and insisted that the Government prioritise the end of rationing.

The last food item to be released from the shackles of rationing was bananas, which for me is quite a significant fact.  Dad loved bananas and I could never quite understand why but I suppose he was only twenty-two in 1954 and hadn’t had the pleasure of the bendy yellow fruit for fifteen years or so.  He had been only thirteen when the war began and in fact it is entirely possible I suppose that he had never had a banana before in his life.  In war time Britain people could grow fruit and vegetables in the back garden while they were ‘digging for victory’ but there was absolutely no chance of growing tropical bananas.  Except, and this is interesting, between 1943 and 1958 bananas were grown for export in Iceland in giant greenhouses powered by geothermal power.

The return of the banana was hailed as heralding an end to austerity and to the curse of the ration book.  The Labour government even instigated a national banana day.

Dad liked all sorts of strange banana combinations, weirdest of all being banana sandwiches on brown bread with sugar, but he was also very fond of chopped bananas with custard.  Personally I’ve never been that keen on bananas at all (I don’t like the smell or the horrid mushy texture) but this rationing fact explains a lot about his unusual dietary preferences.  Once a week we all had to have bananas for a pudding until one day when I was about fifteen I could take it no longer and I refused to eat them.  He was a good natured man of unnatural even temper and this was the only time I can remember him getting really upset with me but I stood my ground and after he had severely chastised me and refused to let me leave the table I think he ate them up for me because he liked them so much.

At about the same time dad used to turn his nose up at a chip butty and found this quite unacceptable and banned the practice at the dinner table, which for a man who would slap a banana between two slices of bread was always a mystery to me.

Bananas are the most popular fruit in the UK with Britons eating an average of between 25 and 30lbs of fruit each year; more than double the amount consumed 15 years ago. Annual UK sales are at a record £750m, representing more than a quarter of all fruit sales’

There are about 120 calories in an average banana, they are an important source of potassium and are one of the healthiest fruits. Vitamins and minerals in a single banana are A and a full range of B vitamins with Thiamine, Riboflavin, Niacin, vitamin B6, and of Folic Acid.  There is also vitamin C, with minerals Calcium, Magnesium, with trace amounts of iron and zinc.

In an average year we (in the UK) now buy 3.5 billion bananas, relegating our native apple into a poor second place.

By one measure we apparently spend more money on bananas than any other supermarket item apart from petrol and lottery tickets, and more than 95% of UK households buy them every week.

Since 1954 the British Government has had occasion to issue ration coupons one final time.  In 1973 in response to the oil crisis when OPEC proclaimed an embargo and there was a real possibility of supplies running short.  Fortunately this never happened but the tokens were issued all the same.