“Our bag is green & made of canvas, strong and leather bound,

Emptied out on summer evenings when it doesn’t rain,

Worn out gloves with pimply rubber stitched up to the knuckles,

All marked ‘Brookfield School’ in pen in prominent positions,

And some with names of other clubs, nicked from the opposition.”  –  Arthur Salway 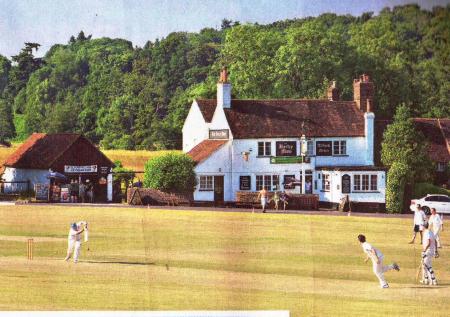 Like my dad before me I worked for the local council and one of the nicest things about this was the social aspect because I worked with a lot of people with similar interests.

One of these was cricket and like most organisations the council had a twenty over cricket team that used to play weekly fixtures against other councils, banks and other businesses in the town.

Before I started work I used to get a guest spot in my dad’s team, Rugby Rural District Council, this was pre 1974 and the reorganisation of local government so there were a lot of small local authorities who sometimes struggled to field a full strength team so there were always places to fill and I was more than happy to go along every Wednesday night for a bat and a bowl and a glass of bitter shandy afterwards.

In 1975 I started work at Rugby Borough Council and my boss, the Borough Treasurer, John Lord, was the captain of the cricket team so amongst my other duties he gave me the job of team secretary and it was my job to arrange the fixtures, book the pitches, look after the kit and make sure we had a full squad every week.

Throughout the summer every Monday, Tuesday and Wednesday I had to allocate a fair amount of my time to phoning around and putting the team together, arranging the catering and making sure all the kit had been returned the previous week.  We had three or four old bats, a collection of balls of varying age and quality, battle scarred batting pads and some old fashioned batting gloves with green rubber spikes sewn onto the fingers.  Best of all were the protective boxes which were several years old and it was a good job we were not too concerned about personal hygiene because these things had been slung around several sweaty groins in the past I can tell you!

On Wednesday we would worry about the weather because many a match was washed out without a bowl being bowled but hopefully it would stay fine and we really didn’t mind playing through a bit of drizzle now and again.

Twenty overs each side meant about three hours of cricket and if both sides used up their full allocation then we had to get a move on towards the end of the season when the days were getting shorter.

We were reasonably successful and joined the local twenty over league where we were not.  I used to produce an annual review of the season and the 1976 yearbook tells a sorry tale of played 10 and lost 8 and finished bottom of the league.

This didn’t really matter because it was the cricket that was important.  Taking to the field to bowl or just sitting waiting for your turn to bat, someone lovingly keeping the score book up to date and wives and girlfriends turning up towards the end of the game just in time to go to the pub afterwards where we would review and assess, exaggerate and rue our mistakes.

Twenty over evening cricket was one of the best things about the summer and was always missed during the long winter months!