A Motoring Offence in Spain

There was still a very long way to go so we planned for another very early start.  When we woke in the morning there was no power and we had to pack in pitch darkness so goodness knows how much stuff we left behind.  We met in the car park and then we had our first problem of the day – the car wouldn’t start!  It was wet and miserable and the electrics were damp and it was probably still trying to get over yesterday’s long drive because this journey was one of the sort of improbable things that these days Jeremy Clarkson does on ‘Top Gear’!

We couldn’t bump start it because it was an automatic so Richard, who understood how cars work,  lifted the bonnet and fiddled with the leads and poked around a bit and the rest of us , who didn’t know how cars worked, stood around and kicked the tyres.  We were all impressed when Richard got the poor thing going and we set off on the road for Burgos on the way to France.

Richard was driving and by the time it got light we were making good progress north along a main highway that, because it was Saturday, was not especially busy this morning.  To this day I still dispute the designation ‘motorway’ because it was single carriageway, had no emergency lane, no lights and as it happens no road markings either.  Richard was driving sensibly and only overtaking when it was safe to do so but then, after about sixty kilometres, we had our next problem.  And this was serious!

All of a sudden the interior of the car was flooded with blue flashing lights from behind and a Spanish highway patrol vehicle was pulling us over.  Richard complied and we all left the vehicle to be confronted by two Guardia Civil policemen in their olive green uniforms, shiny black boots, creaking leather belts and those tricorn black hats that they used to wear, getting out of their green and white patrol car and looking very serious indeed.

We weren’t absolutely sure why they had asked us to stop and when we asked for explanation one of them drew a diagram that seemed to indicate that we had overtaken on double white lines.  Double white lines!  What lines?  They may have been there twenty years ago but there were certainly none there now!

There were two of them and the older one started to write out a ticket for a fine for fifteen thousand pesetas, which was about £60 and seemed like a lot of money to us, especially bearing in mind that we didn’t have any pesetas left anyway.  Anthony was minded to argue and started to get stroppy but the younger one tapped his fingers on the holster of his pistol and readjusted the blood-stained wooden cosh in his belt and the rest of us took that as a sign that we should just shut up and pay up.

This didn’t get over the problem of having no cash but the two highwaymen had a solution and made us follow them to a garage where they supervised the cashier as he exchanged everything that we had got into pesetas and the policemen gleefully took possession of it.  He took all of our French Francs, UK Sterling and what few Portuguese Escudos we had left, and actually we had more of those between us than we thought because Tony had been holding back on a bit of a stash concealed in the back of his wallet that he hadn’t owned up to and the rest of us were all a bit upset about that!  We had been thoroughly mugged and as we waved goodbye to the two policemen Anthony shouted a rather unpleasant accusation of dishonesty and an invitation to enjoy our contribution to the Guardia Civil Christmas party fund, which thankfully they didn’t hear. 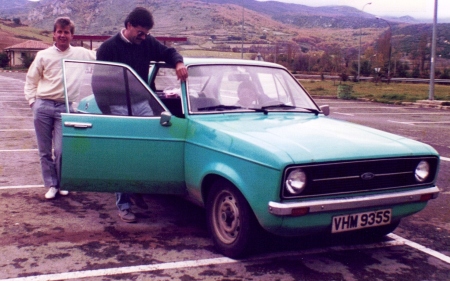 When we arrived back home I wrote to the Spanish Embassy in London to complain and to request a refund and although they replied and sympathised they explained that they had no authority over the police and therefore couldn’t do anything to help.  It was a nice letter though!

Richard was a bit upset about the incident and sulked for the next hour or so while we drove past Burgos and stopped at a little town at just about breakfast time and found a bank where we could get enough cash to buy some fuel to get us out of Spain.  We carried on out of Castilla y León and into the green mountains of the Basque Country, past Bilbaó and San Sebastián and then headed east towards the Pyrenees and then the last Spanish town of Irun at the border with France, which we finally reached about twenty hours behind schedule.