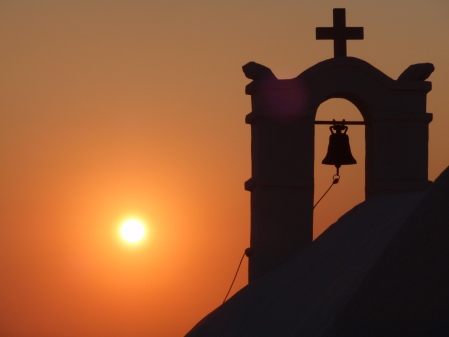 In 2006 I went backpacking to Greece and on 3rd September visited the island of Santorini and late in the day went to the northern village of Oia which is famous for its sunsets.  Quite by chance, two years later, I was in Oia again also on 3rd September.

Oia is even more picturesque than Thira but fortunately not nearly so crowded with fine walks along the top of the cliff, along narrow roads and down twisting footpaths, around churches, windmills and a castle and it was so much more leisurely and enjoyable than the capital.  The town has stricter rules on development and commerce and has managed to successfully protect itself from the excesses of tourism.

Oia has wonderful sunsets and about an hour before the appointed time coaches, buses and cars flood into the little town and brings hundreds of people in to see the spectacle.  They take up position all along the little streets and the place becomes overcrowded and far too busy so on both occasions I was glad that we were going in the opposite direction and back to Thira which by now was much quieter as all the cruise ships had started to leave.  We had timed our visit to perfection and here is my visiting Santorini tip; go first to Oia because while Thira boils over with visitors during the day it is empty in Oia and when this town starts to fill up for the sunset go back to Thira which calms down nicely at about this time when the cruisers all leave.  You can see the sunset in Thira just as well as Oia and let’s be honest, despite what they tell you in Oia, it is exactly the same sunset anyway!

If you have ever wondered why the sky is blue this is the reason.  Light travels through space in a straight line for as long as nothing disturbs it and as it moves through the atmosphere it continues on its journey until it collides with a bit of dust or a gas molecule and then what happens to the light depends on its wavelength and the size of the thing it crashes into.  Dust particles and water droplets are much larger than the wavelength of visible light and when light hits these large particles, it gets reflected in different directions. Gas molecules however are smaller than the wavelength of visible light and when light hits them, some of it gets absorbed and then the molecule radiates the light in a different direction.  The colour that is radiated is the same colour that was absorbed but the different colours are affected differently because blues are absorbed more easily than reds.

This process is called Rayleigh scattering and is named after Lord John Rayleigh, an English physicist, who first explained it a hundred and thirty years ago.  The blue colour of the sky occurs because the absorbed blue light is radiated in different directions and gets scattered all around the sky and since we see the blue light from everywhere overhead, the sky looks blue.  It’s as simple as that!

So what about sunsets?  Well, as the sun begins to set, the light must travel farther through the atmosphere before it gets to us and more of the light is reflected and scattered.  As less reaches us directly, the sun appears less bright and the colour of the sun appears to change, first to orange and then to red and this is because even more of the short wavelength blues and greens are now scattered and only the longer wavelengths are left in the direct beam that we can see.

What makes it even more dramatic is that the sky around the setting sun takes on a lot of different colours and the most spectacular shows occur when the air contains many small particles of dust or water because these particles reflect light in all directions and then as some of the light heads towards us, different amounts of the shorter wavelength colours are scattered out and we get to see the longer wavelengths and the sky appears red, pink or orange. 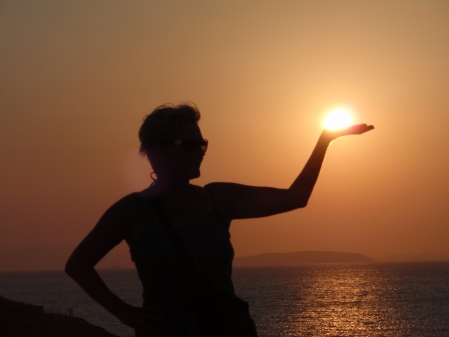