A Life in a Year – 2nd May, Spalding Flower Parade 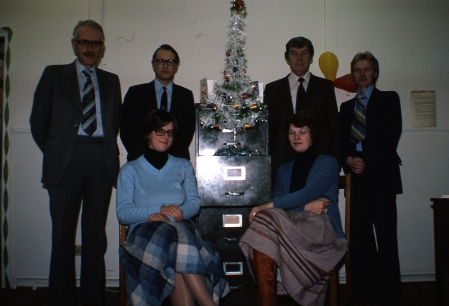 In the late 1970s my first job in Local Government was in the Finance Department at Rugby Borough Council and I worked in a small office of four people one of whom was a man called Ron Lindley (in the picture on the left).  Ron was in his late fifties and had previously served in the army and had worked for a long time at British Leyland in Coventry and, I’m afraid this has to be said, he was a bit boring.  He had a lifetime full of stories and if Ron caught you for a chat you’d really want to make sure you were the one nearest the door.

Anyway, one Monday morning in about 1978 Ron came to work after a week off and I made the mistake of asking him what he had been doing.  He told me he had been to Spalding to the Flower Parade and would I like to see some pictures.  I didn’t but it was rude to say no so I said that I would love to.  To my horror Ron produced five ‘Photo express’ packs of thirty-six photographs each and proceeded to go through each one with an explanation and a commentary.

This took some time and by the end I was close to using the office stapler on my leg to keep me conscious but eventually it came to an end and I mention all of this because when it was all over I clearly remember saying to myself, “Andrew, whatever you do in life, make sure you never go the Spalding Flower Parade!”

The history of the Spalding Flower Parade stretches back to the 1920s when the acreage and variety of tulip bulbs grown throughout the area surrounding the market town became an annual feast of colour.  The crowds that came in created many problems for the town and coaches and cars caused chaos on the narrow lanes around the fields and this continued to happen until in 1948, the Growers’ Association became involved in organising a Tulip Week.  With the help of the Royal Automobile Club, a 25 mile tour through villages and country lanes was planned to show the best fields.

So successful was the attraction that by 1950, Tulip Week had become Tulip Time.  A Tulip Queen competition was organised and the crowning of the Queen was performed just before the start of Tulip Time.  The Queen and her two attendants had to be employed in the flower bulb industry and were selected at competitions held at village dances.

An influx of visitors created an opportunity and an idea to put on an attraction to publicise the bulb industry.  A few experiments with decorated cars showed that the tulip heads could be made into garlands and pinned onto backing materials in colourful designs and would still hold their colour for a few days at that time of year.

To ensure that there would always be tulips on display, even if they might not be in the fields, from the many millions of tulip flower heads removed it was decided that keep some available for decorative purposes, firstly for static displays and some selected carts and vehicles, and these eventually started to drive around the town until, in 1959, the first Spalding Tulip Parade took place. 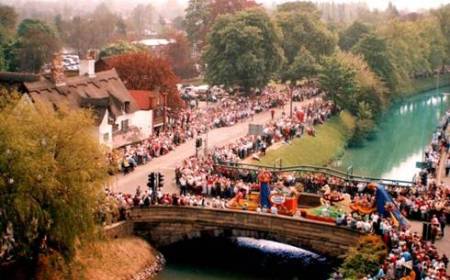 Building of the floats began with an intricate outline of steel tracery welded on a base carefully measured to fit a tractor underneath it. The initial form and steel skeleton of each float was skillfully constructed into the outline shape of the subject and then the steelwork was covered with a special straw matting to form a base to which the tulip heads could be attached.

Teams of up to 200 people then worked throughout the two days before the Parade using up to one million tulip heads and pinning each one onto the floats in the colours and patterns required until all the floats were covered with tulips.  A single float, which can be as much as 50 feet in length, may be decorated by as many as 100,000 tulip heads.

The first Parade was described as ‘a floral pageantry a mile long’.  There were just eight floats but it became an event not to be missed – twenty special trains came from all over England to the sidings at Spalding station.  Temporary caravan villages sprang up and 200,000 people would watch the spectacle. The success of the Tulip Parade, the only display of floral floats in the world using just tulips, brought Spalding and its horticultural industry to the notice of the country. Within only three years, the Parade had become so famous that a quarter of a million people were coming to Spalding on Parade Day to line the four mile route around the town.

In August 2000 I had a change of job and went to work for South Holland District Council and over the next few months I became aware of preparations for the 2001 Flower Parade and I seemed to have a part in all of this.  Even then I had forgotten about Ron’s boring story and just made my contribution.

On Saturday May 6th I got up for a day at work and travelled to Spalding and spent the morning making sure everything was in place for the event and still my memory wasn’t nudged in any way until the Parade came into view and started to pass by.  It seemed to take forever and suddenly it came to me, my words from 1977, “Andrew, whatever you do in life, make sure you never go the Spalding Flower Parade!”

This goes to prove that we really need to be careful what we say because our words can come back to haunt us.  I have now been to ten Spalding Flower Parade’s, each one has long and tedious as the first, each one just as mind numbingly boring as Ron’s packs of photographs.  I left Rugby in 1980 and never saw Ron again, he died a few years later but I will never forget his Flower parade photographs.

Now, just as the format of the Parade is changing (2011) with an exciting new team organising the event and some long awaited and much needed new ideas it seems appropriate that this will be my last as I finish work with South Holland on exactly the same day as the Parade when I go on to something new and hopefully the Parade goes from strength to strength. 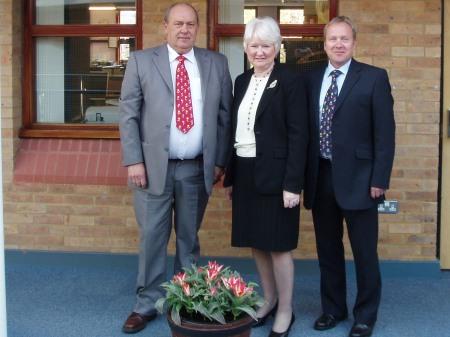