A Life in a Year – 21st March, Baileys Nightclub in Leicester

Although we lived in Rugby and it was a fifty mile round trip a couple of times a month throughout the 1970s we would visit Baileys night club in Leicester.  It was on the Haymarket opposite the clock tower and it had all sorts of top acts on the programme which made the trip worthwhile.

The entrance was at ground level and then there were sweeping steps to the cavernous room upstairs where there was a stage, a dance floor with a revolving mirror ball, a seating and dining area and a few more steps to a couple of bars.  This felt like a grand night out and we would wear our best 1970s clothes, velveteen jackets, bell bottom flares and platform shoes.  Platform shoes were good for me because this was the only time in life that I have known what it is like to be a bit taller, unfortunately everyone else was wearing them as well!  If the fashion police had caught us we would still be doing time even now. It was a really popular place and at the best events there was always the chance of rubbing shoulders with a Leicester City footballer and if one of the big names was performing like Engelbert Humperdink then it was a cocktail dresses and evening suit job.

In March 1978 the now disgraced Garry Glitter performed a series of shows in the week beginning March 21st and I remember going to one of the performances that week.  As well as GG we also went to see Showaddywaddy, Mud, Slade, The Drifters and the Three Degrees but it wasn’t just music because there was comedy too and we went to see Bernard Manning (twice) and the best show I can remember there – Tommy Cooper.  Cooper was as pissed as a fart as usual and about an hour late coming on stage but I recall it being the funniest possible performance with the whole place rocking with laughter.

Sometimes we just went along on the regular night club evenings and this involved a basket meal (chicken usually), several pints of Skol lager and a lot of dancing.  In actual fact it was at Baileys that I perfected my peculiar ungainly and jerky dance style which I have been forever unable to shake off and the reason why no one ever wants to dance with me now. 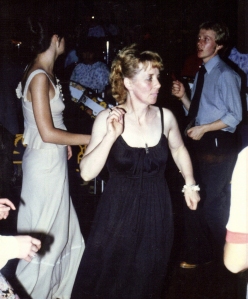