A Life in a Year – 16th January, Hitler retires from Public Life 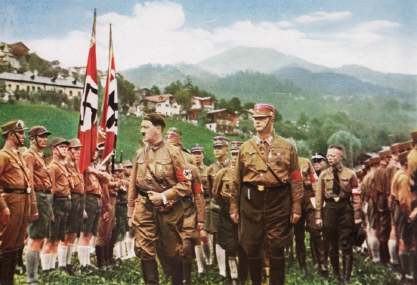 On 16th January 1945 Adolf Hitler took refuge in his Berlin bunker for the last time and this has reminded me of a visit to a part of Nazi history in October 2008.

Berchtesgaden is a municipality in the German Bavarian Alps and is is located north of the Nationalpark Berchtesgaden in the south district of Berchtesgadener Land in Bavaria, which is near the border with Austria and although it is only thirty kilometres south of Salzburg the route is not particularly direct as the line runs first west and then south so that it can follow the river valley to the Berchtesgaden railway terminus.  What is fascinating about Berchtesgaden is that it has a very close association with the history of Nazi Germany and that is why I was interested in visiting the town.

The nearby area of Obersalzberg was purchased by the Nazis in the 1920s for their senior leaders to get away from Berlin from time to time.  I find the concept of them buying anything quite interesting because later on of course they just took anything they wanted without paying anything at all for it.  Adolf Hitler’s own mountain residence, the Berghof, was located here and  Berchtesgaden and its villages were fitted out to serve as an outpost of the German Reichskanzlei office  or Imperial Chancellery whenever the Government arrived in town.

In the closing stages of the war the Allies feared that Hitler would leave Berlin and set up an ‘Alpine Redoubt’ to continue the war from the mountains, so the Royal Air Force bombed the Obersalzberg complex on 25th April 1945.  Many buildings were destroyed, and looting, first by locals and then by the Allied occupation troops completed the job.  One of the conditions for the return of the Obersalzberg to German control in 1952 was the destruction of the remaining ruins. Accordingly, the ruins of Hitler’s Berghof, the homes of Bormann and Göring, an SS barracks complex, and other associated buildings were blown up and bulldozed away.

By the time that we arrived the rain had stopped and although it was still very overcast at least I didn’t have to worry any more about my feet getting wet.  We arrived at the railway station that was a typical Third Reich building that had been built for the Nazis and included a reception hall for Hitler and his guests.  It has gone now but next door was once the Berchtesgadener Hof Hotel where famous visitors stayed, such as Eva Braun, Erwin Rommel, Josef Goebbels and Heinrich Himmler.    It felt slightly chilling to be walking in the footsteps of the most evil men of the twentieth century and it seemed strange that this pretty Bavarian town was once home to these people.

After a visit to the Tourist Information Office we talk the steep walk towards the town and arrived evntually in the busy main square that was surprisingly touristy.  It was time for refreshment so we selected a café and found tables in the window that had good views over the mountains that at nearly three thousand metres high are the third highest in Germany.  We couldn’t see the tops today because they were covered in cloud but somewhere among them was the Kehlstein and at the top of it was the Eagle’s Nest.

Its proper name is Kehlsteinhaus and it was commissioned by Martin Bormann in 1939 as a fiftieth birthday present for Hitler. It was a huge construction project and took thirteen months to build so I couldn’t help wondering how they kept it a surprise?   It is situated on a ridge at the top of the mountain and is reached by a spectacular six kilometre road that cost thirty million Reichsmark to build (that’s about one hundred and fifty million euros today). The last one hundred and twenty-four metres up to the Kehlsteinhaus are reached by an elevator bored straight down through the mountain and linked through a long granite tunnel below. The inside of the large elevator car is surfaced with polished brass, Venetian mirrors and green leather. We didn’t have enough time to visit the Eagle’s Nest today so I suppose we will just have to come back another time.

The weather wasn’t brilliant in Berchtesgaden but at least it wasn’t raining so we walked the length of the town with its typical painted Bavarian houses with all roads leading to a large square with a war memorial and war paintings on the wall.  Sometimes it is easy to forget that although the Germans were the aggressors in the two world wars of the twentieth century that this was a catastrophe for them as well.

Just as in Salzburg the shops were interesting and many of them sold traditional German clothing; the girls giggled while they tried the Julie Andrews dresses and Micky treated himself to some wollen shooting breeches.  It is interesting how Geman people are quite prepared to wear these traditional clothes in a completely unselfconscious way and at one point we saw a young lad of about fourteen in full lederhosen and braces, felt hat and cape and I wondered how difficult it might be to get a fourteen year old in England to walk around the streets dressed like that.  To be fair it wouldn’t be right to expect it because he would surely be beaten up within fifty metres of leaving the house.

It was obvious that the sun wasn’t going to get out today but it was pleasant enough to sit outside at a café and have our predictable lunch of soup and strudel served to us by waitresses in traditional Bavarian clothing.  By now we had really exhausted everything there was to do in Berchtesgaden on a rather dreary and overcast day so we walked back to the railway station to catch the three o’clock train back to Salzburg.  For the first half of the journey the train descended down the mountain to Bad Reichenall and then it turned into the low plain and returned effeciently to Austria.